A week in which “Don’t tell him, Pike” gained a new significance…

… and the man in question, a.k.a. Gavin Williamson, perhaps pondered the words of another TV comedy, “Yes Minister”: Bernard Woolley: “That’s one of those irregular verbs, isn’t it? I give confidential security briefings. You leak. He has been charged under section 2a of the Official Secrets Act.” However, aside from the significant political action this week, which has included the first MP to be unseated by the Recall of MPs Act 2015 (yes, that really is the Short Title) and substantial losses by Conservatives and Labour in the local elections, there has been some relevant news in law and religion – although not very much “hard law”.

Last week we reported that the Church of England had issued a statement in advance of the BBC programme “Scandal in the Church of England” which was broadcast on Monday 29 April. Although focusing on the management of abuse in the Lincoln diocese, it raised more general issues on the approach of the Church in this area and its timing coincided with the IICSA seminar on mandatory reporting, infra. The Church issued its response to the programme, including a link to the Redstone operation in which the Lincolnshire Police are working in partnership with the Diocese of Lincoln. Thinking Anglicans has posted links to media comments prior to the broadcast, and the reaction of commentators following its airing.

The Bishop of Truro has published an interim report of the inquiry into FCO Support for Persecuted Christians, established in December 2018 by the Secretary of State for Foreign and Commonwealth Affairs. The intention was that the Review should be concluded by Easter 2019; however, Bishop Mountstephen explains that “it rapidly became apparent that the scale and nature of the phenomenon simply required more time” – hence the interim report. It is hoped that the final report will be delivered by the end of June.

On 2 May, a Commons debate was held in Westminster Hall on sharia courts in the United Kingdom: we noted it here. Replying, Edward Argar (Parliamentary Under-Secretary of State for Justice) reiterated the Government’s position on sharia: that “There is no parallel system of sharia law in operation in the UK; Her Majesty’s courts enforce our laws … sharia law is not part of the British legal system.”

Last week we reported that the Ven Peggy Jackson, Archdeacon of Llandaff, seconded by the Revd Dominic McClean, was to propose a Private Members’ Motion at the meeting of the Governing Body of the Church in Wales on 1-2 May. This would propose that: (i) requests that all Bishops, consonant with previous undertakings, agree not to hold in future separate ordination services for any candidates, on the grounds of the candidates’ views on gender; (ii) calls on the Bench of Bishops to resile from paragraph 5 of the Explanatory Note to their 2014 Code of Practice and cease to ordain those who, refusing the sacramental ministry of women, expect to rely upon the conscience clauses of the Code.

The Church Times reports that this attempt to bar traditionalists from ordination in the Church in Wales was heavily defeated. One commentator voiced the feeling of many: “Even given our bitter history and painful divergences, this strikes me as a despicably mean motion. Glad it got short shrift.”

On 30 April, the BBC reported that a colony of 50,000 bees had been removed from the roof of St Nicholas, Piddington, Oxfordshire. The church has been home to the bees for about 20 years, and in addition to disrupting services and causing honey to drip down the walls, the hive had caused the ceiling above the pulpit to sag. The colony – measuring two metres by one metre  – cost £5,000 to remove and the operation took three days. Bee infestation was one of the issues identified in the 2014 quinquennial inspection, which noted the damaged decoration to the chancel arch. The church was subsequently involved in fundraising for the range of work which was necessary.

Media reports do not indicate whether a faculty was required for the work, either specifically or as a component of a larger restoration and repair programme. Unlike bats and other species covered by the Wildlife and Countryside Act 1981 and other legislation, bees are not protected in law [See Natural England and Defra advice Protected species: how to review planning applications], and the removal of the hive per se would not affect the historical and architectural importance of the Grade II* building. We will not attempt to second guess the opinion of the archdeacon, although should the case reach the Oxford Diocese consistory court, it will be reviewed in a monthly round-up.

We note that the church did employ one of the lesser know amenity societies – the Tree Bee Society – to undertake the three days’ work on site. The bees were then quarantined for a few weeks before being rehomed at the society’s base in Lancashire. While the honey taken from the roof was too dirty to be consumed, the wax retrieved may be made into hand cream.

For completeness, it should be noted that the 200,000 bees living in hives on Notre-Dame cathedral roof were reported to have survived the blaze. The hives are situated on top of the sacristy by the cathedral’s south side, around 30m below the main roof. Consequently, they remained untouched by the flames.

When a Google user asks a question in Google Search, it sometimes shows a search result in a special featured snippet block at the top of the search results page. The featured snippet block includes a summary of the answer, extracted from a webpage, plus a link to the page, the page title and URL. Those searching on “church of england wedding fees 2019” will come to such a snippet linking to our post Church of England parochial fees 2019, which probably accounts for the number of hits this continues to receive. Different combinations of search terms on parochial fees will not necessarily generate this featured snippet, although our post is likely to be captured along with others on the topic. Nevertheless, it appears as though the interest in parochial fees relates to weddings rather than to those for the other occasional offices.

Whilst the prospect of a CofE wedding for £1,000 managed to catch the headlines and social media, our post indicated that the featured story was of limited application – only 3 such weddings available per year at St John’s Hartford, and most divorcees would be excluded. Nevertheless, the news prompts a number of questions: will this raise the expectations of brides on the costs associated with a “church wedding”; will other congregations follow suit: and whether it will have an impact on the numbers opting for church weddings?

Do you know the Bishop of Norwich?

News, not for port drinkers but for those with an interest in ecology. On 3 May, No 10 announced that the Queen has approved the nomination of The Right Reverend Graham Barham Usher for election as Bishop of Norwich. Bishop Graham took up his current appointment as Bishop of Dudley in 2014; he maintains an interest in ecology as one of the Church of England’s environmental bishops and in medical ethics as a board member of the Human Tissue Authority. 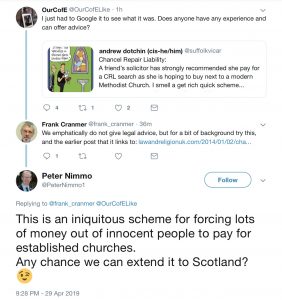 1 thought on “Law and religion round-up – 5th May”