The BBC reports that the Family Division of the High Court has been asked to rule on whether a teenage Jehovah’s Witness with leukaemia should be treated with blood products against his wishes.

The issues were examined by Francis J at a preliminary hearing in the Family Division of the High Court in London and the case is expected to go to a full hearing in the near future. John McKendrick QC, on behalf of the unnamed NHS Trust, said that the boy had refused consent to treatment and was “extremely articulate about his Jehovah’s Witness faith”. The Trust is currently respecting the boy’s views and doctors are not treating him with blood products.

On Friday, the Faith and Order Commissions of the Church of England and the Methodist Church published a report containing four recommendations that the Church of England’s General Synod will be asked to approve in July. They include “the episcopal commissioning of all ordained ministers in each church for readiness to serve in and with the other”; and the report calls on the Archbishops’ Council to prepare legislation to be put forward for first consideration in February 2020, as set out in Mission and Ministry in Covenant. There is a long report on the recommendations in the Church Times, here.

The May 2019 Archdeacons’ News includes the following clarification of the role of the archdeacon in relation to List B faculty applications:

With the ability now to apply for a licence for temporary re-ordering online, the same principles apply. The archdeacon may wish to consult member(s) of the DAC before making a decision. But this is again a matter for the archdeacon, as is the decision to grant the licence.

In all of this, good working relationships are crucial, and it is much better if archdeacons and DACs work in harmony and with mutual understanding. The purpose of this note is simply to ensure clarity over the archdeacon’s role and where the boundaries lie.”

General Synod will take place in York from 5 to 9 July. The first batch of papers for next month’s meeting of the Church of England’s General Synod is now available here. The remaining papers will be issued on 21 June. This week we posted on the Draft Cathedrals Measure, which is due for First Consideration debate at General Synod on Monday 8 July. Drafts are now available of the Draft Cathedrals Measure, the Explanatory Notes, and a supporting paper on the Theology of Cathedral Governance, based on a consultation held at St George’s Windsor on 1-2 April 2019, led by the Third Church Estates Commissioner, Dr Eve Poole.

Also within this batch of papers is the Clergy Discipline Commission Annual Report 2018, GS Misc 1226, which provides an interesting segue to our recent post Different perspectives of the CDM. We will issue a separate post on the Report within the next few days.

On 11 June, in Motshidiemang v Attorney General [2019] MAHGB-000591 16, the Botswana High Court held that the prohibition in the Botswana Penal Code on sexual relations between consenting adults of the same sex was unconstitutional. Although nothing to do with religion, the judgment has a considerable amount to do with morality – and we propose to post a separate note on it later in the week.

Our earlier post, Risks of disregarding the faculty jurisdiction, considers the 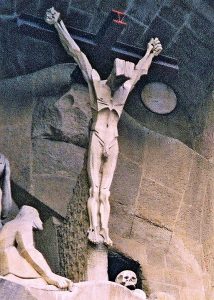 financial, reputational and other issues of which an incumbent and PCC should be aware when undertaking work without the necessary permissions. However, the potential penalties are as nothing compared with the £32M that the Sagrada Familia trustees were required to pay the Barcelona city authorities in respect of the building work which commenced, without permission, 137 years ago.

The building is a UNESCO World Heritage Site but its construction is not supported by any government or official church sources. The new seven-year licence will cover the building up to completion, planned for 2026 to coincide with the centenary of Gaudí’s death. When construction began, it was intended to be a simple Roman Catholic church, although later it was designated as a cathedral and in 2010 Pope Benedict XVI declared it a basilica. The development of the construction techniques and materials is described here, many of which were unavailable to Gaudi when he formulated his original design.

In an article in the Law Society Gazette, Guy Beringer, one of BAILII’s trustees, explains why BAILII needs your support. BAILII costs around £170,000 a year to run and gets £50,000 from the Ministry of Justice under a contract to give the public free access to case law. But for the remaining £120,000, it has to rely on donations.

We’ve nothing to add, except to say that we simply couldn’t write the blog without it.

Even among well-respected lawyers, the phrase “Revocation of Article 50” has become a much-used shorthand to denote one option for ending the present Brexit scenario. However, Article 50 forms part of the Treaty on European Union (TEU) and as such, it is not possible for the UK to revoke Article 50 TEU per se. However, the UK may revoke its notification to leave the EU under Article 50; as the CJEU stated in its judgment in Case C-621/18 Wightman and Others v Secretary of State for Exiting the European Union,

“… when a Member State has notified the European Council of its intention to withdraw from the European Union, as the UK has done, that Member State is free to revoke unilaterally that notification.
That possibility exists for as long as a withdrawal agreement concluded between the EU and that Member State has not entered into force or, if no such agreement has been concluded, for as long as the two-year period from the date of the notification of the intention to withdraw from the EU, and any possible extension, has not expired”.

The European Parliament’s Briefing “Article 50 TEU: Withdrawal of a Member State from the EU” remains valid and is worth re-reading.

The appears to be some confusion regarding the position of mandatory reporting in English law. A letter to The Times suggested that “there is still confusion, even among those who should know there is no statutory legislation to report child abuse in England + Wales”.  However, as Frank pointed out, “There’s no mandatory legal duty to report suspected abuse to the police, but charity trustees in England & Wales do have a mandatory duty to report ‘serious incidents’ to the Charity Commission. Which, admittedly, isn’t quite the same thing”.

Although not mandatory reporting in the strictest sense, there is perhaps understandable confusion over the meaning of “due regard” within ecclesiastical legislation in relation to the reporting of serious incidents  – an issue that was recognized in the Draft Cathedral Measure, on which we reported yesterday.

And from the US…

In State v Arlene’s Flowers, Inc. WA Sup Ct June 6, 2019, the Washington Supreme Court, sitting en banc, unanimously upheld its earlier judgment in which it had ruled that Ms Barronelle Stutzman, a florist and proprietor of Arlene’s Flowers, had violated the Washington Law Against Discrimination (ch. 49.60 Revised Code of Washington) by declining to sell wedding flowers to a gay couple. It also declared that it had not acted with religious animus when it ruled that such discrimination was not privileged or excused by the US Constitution or the Washington State Constitution. Furthermore, even if the State Constitution did require strict scrutiny, that test had been met:

“public accommodations laws do not simply guarantee access to goods or services. Instead, they serve a broader societal purpose: eradicating barriers to the equal treatment of all citizens in the commercial marketplace. Were we to carve out a patchwork of exceptions for ostensibly justified discrimination, that purpose would be fatally undermined.”

The US Supreme Court had previously granted certiorari, had vacated the Washington Supreme Court’s original judgment and had remanded it “for further consideration in light of Masterpiece Cakeshop, Ltd v Colorado Civil Rights Commission”. [With thanks to Howard Friedman.]

Meanwhile, CBS Denver reported that a third discrimination suit had been filed against Jack Phillips, the owner of the Masterpiece Cakeshop.

The BBC has begun publishing transcripts of Jonathan Sumption’s 2019 Reith Lectures, Law and the Decline of Politics. Thus far:

The Solomon Times reports that the Rt Revd David Vunagi, former Archbishop of the Church of Melanesia, is the sole nominee for Governor-General of the Solomon Islands.  But he’s not the first such appointment: from 1985–90 Sir Paul Reeves, previously Archbishop of New Zealand, was Governor-General and the first Māori to hold that office. [With thanks to W Elliot Bulmer.]