Some light relief from Brexit

The short, 2-page judgment Re St Peter West Blatchington [2019] ECC Chi 4 (revised) will be of interest to those with the responsibilities for the care and maintenance of churchyards. Trees in churchyards seldom feature in reported judgments, and this consideration of the dangers from falling pine cones is probably a first. The petitioners relied on an expert report on the 18m Scots Pine; the crown spread is 8m and its diameter at breast height (DBH) is 600mm; minor deadwood is present through the crown. The report states [4]:

“The tree is situated at the junction of two paths within the grounds of the church and the crown spreads over an area used as an entrance for a pre-school. An abundance of pine cones are produced which take two years to mature. These pine cones are the subject of concern as previously persons passing have been struck by falling cones, The falling of pine cones upon passing persons does pose a significant risk of injury.”

The Worshipful Mark Hill QC noted that the petitioners had indicated that two adult men have been struck by falling cones in the recent past; they submitted that the size and weight of the cones are such as to cause significant injury were they to fall on a child or an infirm elderly person. The number of cones (estimated at 130), is such that the risk of one striking a passer-by can properly be categorised as significant, rather than speculative or fanciful [8]. He continued [emphasis added]:

“In the particular circumstances of this case, the determinative factor seems to be the proximity of the tree to a well-used pedestrian thoroughfare where young children attending pre-school events or the Sunday school would be particularly vulnerable. This Court will not lightly interfere where a parish has carried out a careful assessment of risk in good faith“.

[9] I therefore direct that a faculty may pass the seal permitting the felling of the tree on condition (i) that the work is carried out by a suitably qualified contractor with adequate public liability insurance in place and (ii) that a replacement tree of a species approved by the archdeacon be planted during the current or next growing season at a location approved by the archdeacon.” 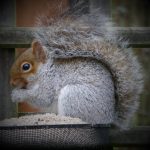 Not everyone in West Blatchington was happy with the proposal. There was a letter of objection to the court from long-term residents of the area (although not necessarily of the parish), and The Times reported the views of other residents, including a pre-schooler aged 4, who said: “I don’t want it to be cut down because the cheeky squirrel lives up there. I’ll miss the cheeky squirrel.” Her mother said that the children “stand at the window with binoculars and look out for the cheeky squirrel. They make boxes of nuts and berries so he comes down. They’ll really miss the squirrel and the tree.”

The cheeky squirrel did not feature in the judgment. Nevertheless, in Leakey v National Trust [1980] QB 485 (CA) – on which there is a helpful note, here – it was held that a landowner is liable for nuisance caused by natural causes on their land where they either knew, or ought to have known of the hazard, and that they then failed to take reasonable steps to remedy the potential nuisance.