An article in Prospect Magazine, 24 September 2019, commented “… the fact Brenda Hale, who handed down the withering verdict in words of crisp fury, could carry a fully united bench of 11 justices with her makes her a chief justice of the very highest order. This, recall, is a highly contentious judicial question …” However, it posed the question “Could Johnson’s abject legal humiliation turn into political vindication?”

More on that judgment

Inevitably, we posted a brief note on the judgment in R (Miller) v The Prime Minister [2019] UKSC 41. Our first thought was to produce a longer, more considered piece when we had had time to reflect on it; however, it has already given rise to a considerable amount of detailed, expert comment from constitutional law specialists (which we are emphatically not), beginning with:

And see Max Steinbeis’s comment in this week’s Verfassungsblog editorial: A load of humbug. So we may well just pass on that one.

After the Supreme Court handed down its decision, a spokesperson for the Attorney’s Office said that the Government had acted in “good faith and in the belief that its approach was both lawful and constitutional”.

“These are complex matters on which senior and distinguished lawyers have disagreed. The Divisional Court led by the Lord Chief Justice agreed unanimously with the Government’s legal position, as did the Outer House in Scotland. We are disappointed that in the end, the Supreme Court took a different view. We respect the judgment of the Supreme Court.”

As one would hope: it’s called “the rule of law” – not that that assurance excused the Attorney’s rather shouty performance in the Commons on the following day. And the Daily Mail’s take? 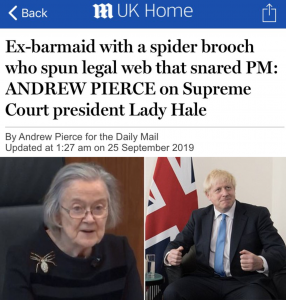 There are no words…

When is an Act not an Act?

Parliament resumed and, welcoming MPs back to their place of work, Mr Speaker said this:

“The UK Supreme Court ruled yesterday that ‘Parliament has not been prorogued’ and that the Speaker of the House of Commons and the Lord Speaker ‘can take immediate steps to enable each House to meet as soon as possible’ to decide upon a way forward … The item relating to the Prorogation of Parliament in the Journal of Monday 9 September is expunged and the House is instead recorded as adjourned at the close of the business. I instruct the Clerk to correct the Journal accordingly and to record the House to have adjourned at the close of business on Monday 9 September until today.

Members should also be aware that Royal Assent to the Parliamentary Buildings (Restoration and Renewal) Bill, which formed part of the Royal Commission appointed under the quashed Order in Council, will need to be re-signified.

So the Bill became an Act but has become a Bill again.

On 15 September, we considered the implications of prorogation and noted that this would mean that thirteen Government bills would fall, together with all the private Member’s bills; however, since the Supreme Court declared that prorogation was “unlawful, void and of no effect” and the Speaker has ruled that the House merely adjourned, they are now before Parliament again.

The College of Bishops met in Oxford from 16 to 18 September and the Church’s Press Release indicated that their “prayerful reflections” had included considerations on the national situation and “the outlook for Brexit”. Following the toxic exchanges in the Commons when it reconvened on Wednesday, a further Press Release, drafted by a group of senior bishops on behalf of the College, was released. This called for “a new tone of listening and respect in debates and describes the use of language in some cases as ‘unacceptable’, the 2016 referendum to be honoured, and for the rule of law and impartiality of the courts to be upheld.

The College’s statement was well received with regard to the proceedings in the Commons; more robust observations were made by Nick Bains, Bishop of Leeds, in his blog Language and leadership, and in  the interventions in Thursday’s debate in the House of Lords by the Archbishop of Canterbury, the Bishop of Durham, Paul Butler, and Bishop of Southwark, Christopher Chessun, (conveniently summarized in Thinking Anglicans), and by David Walker, Bishop of Manchester in  Rhetoric of a Playground Bully or Political Discourse? (in ViaMedia.News/).

The bishops’ call for “the 2016 referendum to be honoured” was less well received by those uncomfortable with the circumstances surrounding the event.

On 25 September, McFarlane P handed down his judgment on R (TT) v The Registrar General of England and Wales & Ors [2019] EWHC 2384 (Fam) which established a definition of the term “mother” for the first time under the English common law. The proceedings came before the court by way of an application for judicial review of the decision by the Registrar General that, despite the fact that the Claimant was legally male at the time that he gave birth, he must be registered on the birth certificate as his child’s mother. Our summary of the case is here.

Birth certificates were again in the news with an item on the BBC Widow’s fight to get partner’s name on birth certificate. Because the woman and her partner were not married, it was necessary to obtain a court order proving paternity before his name could be added to the certificate. This is now subject of an e-petition which, at the time of writing, had 1,314 signatures.

Readers will be aware of the provisions within the Civil Partnerships, Marriages and Deaths (Registration etc) Act 2019 regarding the inclusion of the mother’s name on a birth certificate. This is still awaiting the necessary secondary legislation, which must be approved by both Houses.

Grant-aid to places of worship

In our 4 August round-up, we considered the case of grant-aid by parish and town councils to places of worship: specifically, Lyme Regis, where the town councillors had agreed to give a grant £40,000 towards repairing the tower of St Michael’s Church, apparently against the advice of their Clerk – and this week, the issue was highlighted by the National Secular Society and others.

As we reported in June, the Historic Religious Buildings Alliance raised the current law’s lack of clarity in its 2017 submission to the DCMS English Churches and Cathedrals Sustainability Review, but nothing has been done since then. The present political climate does not appear to be conducive to an early settlement of the matter.

Like almost everyone else interested in current case-law, we use BAILII at least two or three times every week. The Law Society Gazette reports, however, that a row has broken out between the trustees of BAILII and the Ministry of Justice about precisely how one can use the judgments.

The MoJ told someone in France who asked to reuse some of the judgments published on BAILII under the Open Government Licence, that:

“The judgments are provided by the judiciary to BAILII (assisted by staff who work at the Royal Courts of Justice). However, the MoJ is considered as the information provider of these Crown copyright publications. The MoJ agrees that these judgments can be reused under the terms and conditions of the Open Government Licence. Once the judgments have been sent to BAILII by the various teams at the RCJ, the BAILII website becomes the source of these judgments. The judgments have been put on BAILII so that they can easily be downloaded. Please go ahead and download the judgments you require from there.’

At which the Chair of BAILII Trustees, Sir Ross Cranston, commented: “We have seen the letter from the MoJ. Written without consulting us and in ignorance of our status. No one can download judgments from our website without our permission” [our emphasis].

We are utterly, utterly confused by this. Presumably, it all depends on what you mean by “download”. We frequently download entire judgments prior to summarising them, or we extract passages in order to quote them: it’s quicker and more accurate than re-keying them. So should we not be doing so? Or as an anonymous contributor commented:

And finally… I: Would you like parmesan with that?

Pastafarian pastor leads prayer at Alaska government meeting: or should that have been “Pastofarian pasta”?

And finally…II: Nuns on the run

Irish Legal News reports that Ms Elaine Kelly, a Northern Ireland barrister who gave up her practice to join the Sisters of the Adoration five years ago has left the convent. She was told that she will not be allowed to take her final vows because the congregation has become too small to meet the standards of governance of the Roman Catholic Church. Ms Kelly was called to the Bar of Northern Ireland in 1991 and to the Bar of Ireland in 2004, specialising in family law. Martina Purdy, the former BBC News NI political correspondent who also gave up her career to join the convent in the same year, has also left.

In a statement, Ms Kelly said: “When I entered the Adoration Sisters five years ago, I believed it was for life. I never saw this moment coming when I would have to leave.” She has said that she will take time out to reflect and consider her future.

Meanwhile in Ditchingham, Norfolk, the seven nuns of All Hallows Convent, announced on Monday that they are to leave the site which the Community has occupied for more than 150 years to become a “dispersed religious community”. The Sisters took the decision to offer the site to new users and selected applicants through a ‘Dragons’ Den-style event’. Two of the older Sisters will move into supported accommodation at All Hallows Nursing Home, now run by an independent charity, and another Sister has moved to undertake a solitary life on the Isle of Mull.