Holocaust denial and the ECHR

In a case that we should probably have noted at the time – but didn’t – the ECtHR ruled unanimously on 3 October in Pastörs v Germany 55225/14 [2019] ECHR 673 that the conviction of a deputy for denying the Holocaust during a speech in the Land Parliament of Mecklenburg-Vorpommern had not violated his rights under Article 10 ECHR (freedom of expression).  It also held by four votes to three that there had been no violation of Article 6 (fair trial).

On the Article 10 issue, the Court concluded that:

“… the applicant intentionally stated untruths in order to defame the Jews and the persecution that they had suffered during the Second World War. Reiterating that it has always been sensitive to the historical context of the High Contracting Party concerned when reviewing whether there exists a pressing social need for interference with rights under the Convention and that, in the light of their historical role and experience, States that have experienced the Nazi horrors may be regarded as having a special moral responsibility to distance themselves from the mass atrocities perpetrated by the Nazis … [T]he Court therefore considers that the applicant’s impugned statements affected the dignity of the Jews to the point that they justified a criminal-law response. Even though the applicant’s sentence of eight months’ imprisonment, suspended on probation, was not insignificant, the Court considers that the domestic authorities adduced relevant and sufficient reasons and did not overstep their margin of appreciation. The interference was therefore proportionate to the legitimate aim pursued and was thus ‘necessary in a democratic society’” [48].

Not quite a score-draw in the Court of Session

On Tuesday, instead of advising its Opinion in Vince & Ors v The Advocate General [2019] CSIH 51 P845/19 and P900/19 as expected, the Inner House chose to reserve its position. The Lord President announced that the Court would “continue consideration of the reclaiming motion and the petition to the nobile officium until Monday, 21 October, by which time the position ought to be significantly clearer. At that time the court will expect to be addressed on the facts as they then present themselves” [12]. 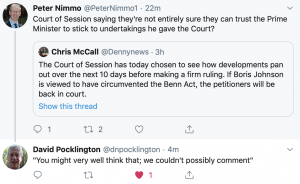 And in our first shot at reporting the case, we got the title wrong.

Somewhat late on Tuesday afternoon, details were published of the Orders Approved and Business Transacted following the meeting of the Privy Council held by the Queen in Buckingham Palace. Among the matters addressed in the 153-page document (unpaginated) were:

The design of the fifty pence gold, silver and cupro-nickel coins is to be as follows:

‘For the obverse impression Our effigy with the inscription “· ELIZABETH II · D · G · REG · F · D · 50 PENCE” and the date of the year, and for the reverse the inscription “PEACE, PROSPERITY AND FRIENDSHIP WITH ALL NATIONS” accompanied by the date 31 October 2019. The coin shall have a plain edge.’

The proclamation came into force on 9 October 2019, and in view of the current uncertainty on the date of “exit day”, one wonders whether this might be premature, having echoes of former Transport Secretary Chris Grayling’s contracts for shipping.

The House of Commons Library has produced an extremely useful Briefing Paper which identifies issues and bills that may appear in the Queen’s Speech on 14 October 2019 or require legislation in the forthcoming Session. Section 2 reviews legislation that has already been introduced and carried over or was published in draft in the current Session. It also lists the Government bills that fell at prorogation. Section 3 provides information on plans for legislation, initially announced before the 2017-19 Session, that may still form part of the Government’s plans. Section 4 reports statements or press speculation indicating that a particular issue is likely to be the subject of future legislation.

Is belief in personal ownership of copyright “philosophical”?

In Gray v Mulberry Company (Design) Ltd [2018] UKEAT 0040/17/1807, Ms Gray was asked to sign a standard contract clause assigning copyright in her work to her employer. She was afraid that the clause would give them ownership over a novel and screenplay she was writing so she refused to sign – despite the fact that the contract was amended expressly to exclude them – and was dismissed. She sued, asserting that a belief in “the statutory human or moral right to own the copyright and moral rights of her own creative works and output” amounted to a philosophical belief within the meaning of s.10(2) of the Equality Act 2010, but lost both in the Employment Tribunal and on appeal.

Last week, her case was before the Court of Appeal. Watch this space.

Colin Bloom has been appointed as Faith Engagement Adviser at the Ministry of Housing, Communities and Local Government. He will lead a review into how best the Government should engage with faith groups in England. He has previously been Executive Director of the Conservative Christian Fellowship and Director of Christians in Politics.

Downloading judgments from BAILII: an update

In our roundup a fortnight ago we mentioned a report in the Law Society Gazette that a row had broken out between the Trustees of BAILII and the Ministry of Justice about precisely how one can use BAILII judgments. The MoJ had told an enquirer that “we are content for you to reuse the judgments you want under the terms of the Open Government Licence. They have been made available through BAILII for the purposes of making them easily downloadable” – to which the Chair of BAILII Trustees, Sir Ross Cranston, replied: “We have seen the letter from the MoJ. Written without consulting us and in ignorance of our status. No one can download judgments from our website without our permission”.

At which we (like, we imagine almost all legal researchers in the UK) were utterly confused: we download BAILII judgments all the time. To our great relief, however, we haven’t been breaching BAILII’s copyright: Paul Magrath, Head of Product Development and Online Content at the Incorporated Council of Law Reporting, has unpicked the issue in great detail here. Phew!

What’s in a name?

… well quite a lot, perhaps, in relation to future developments in the Anglican Communion. At the invitation of the Gafcon chairman, Archbishop Foley Beach (who, by the way, is Archbishop of the not-in-Communion Anglican Church of North America), the monthly newsletter for September was written by Laurent Mbanda, Archbishop of Rwanda. Following a review of development in Rwanda, Archbishop Laurent states: “As part of the continuing biblical realignment of our Anglican Communion, I am pleased to announce that the Synod of the Anglican Church of Rwanda has passed a resolution to change our name from ‘Province de l’ Eglise Anglicane au Rwanda’ to simply ‘Eglise Anglicane du Rwanda’. Removing the word ‘Province’ is a significant change. We are not subjects. Some want us to accept that it is essential to being Anglican that you are recognised by Canterbury, but we find our identity first and foremost through our Biblical and Anglican doctrinal inheritance in Christ.”

On Monday, commenting on the judgment in the Outer House in Vince, David Allen Green retweeted

“the perfect one tweet summary of today’s Scottish judgment and media reaction”:

Judges: “We are satisfied with the assurances made in court by the government. BTW media, he’s duping you.”

And finally… II: another Royal Proclamation