– as Dominic Raab appeared to say on R4 on Friday.

Exceptionally, Parliament sat on Saturday 19 0ctober and the House of Commons passed the following Resolution, after an amendment to the Government’s motion proposed by Sir Oliver Letwin, by 322 votes to 306. The text is as follows:

“That, in light of the new deal agreed with the European Union, which enables the United Kingdom to respect the result of the referendum on its membership of the European Union and to leave the European Union on 31 October with a deal, this House has considered the matter but withholds approval unless and until implementing legislation is passed.”

However, Professor Steve Peers commented that the Government subsequently announced its intention to table a motion to approve the revised Withdrawal Agreement again on Monday – and if it were to pass, it would mean that the extension request could be withdrawn or amended. Against this, Mr Speaker might not allow such a motion to be put to the House again because the Government would be attempting to put the same issue before the House a second time when the House has already voted on it. Professor Peers was also uncertain whether or not a second motion would be amendable.

The Commons adjourned at 4.04 pm on Saturday and will meet tomorrow, 21 October, at 2.30 pm. Subsequent government moves, summarized by BBC’s Laura Kuenssberg on Saturday: “Govt is sending three documents to the EU tonight – the 1st, the Benn Act extension letter, exactly as set out in law, but that PM has not personally signed; 2nd, a cover note from Sir Tim Barrow and the 3rd, a letter signed by the PM arguing that further delay is a mistake”.

So what happens next will not be at all clear until tomorrow – if then. Needless to say, speculation is rife, but on the basis vīta brevis, ars longa … iūdicium difficile, we will not comment further. However, lurking in the wings is the Inner House of the Court of Session, which in Petition of Dale Vince and Others Against the Advocate General [2019] ScotCS CSIH 51 concluded at [12] that

“The court will … continue consideration of the reclaiming motion and the petition to the nobile officium until Monday, 21 October, by which time the position ought to be significantly clearer. At that time the court will expect to be addressed on the facts as they then present themselves.”

Wales and the revised Withdrawal Agreement

Amid all the talk of the position of Northern Ireland and Scotland, Roger Awan-Scully, of Cardiff University, tweeted: “Just in case anyone was in any doubt: the number of mentions of Wales in the 64 pages of the revised Withdrawal Agreement = 0”.

Regarded by many commentators as a Tory election manifesto, David Allen Green tweeted “There is nothing worth commenting on in the Queen’s Speech, and so I won’t“. However, the full text includes “Legislation [that] will transform the approach of the justice system and other agencies to victims of domestic abuse [Domestic Abuse Bill], and minimise the impact of divorce, particularly on children [Divorce, Dissolution and Separation Bill].

The Domestic Abuse Bill was carried over from the previous session, following a decision on 2 October. The Bill can therefore continue its progress through Parliament as from the start of session 2019-20 and it stands referred to a Public Bill Committee which is due to report by Thursday 21 November.

However, the Divorce, Dissolution and Separation Bill was not carried over and was required to commence its passage through Parliament again. It was given its first reading in the Lords on 15 October. The Times reports that the Government had indicated that the new Bill would mirror provisions in its earlier incarnation, and the Government’s updated Policy Paper reflects the work undertaken to date.

The BBC reported that, on Thursday, the Speaker of the Northern Ireland Assembly, Robin Newton MLA, wrote to Members informing them that a petition to recall the Assembly had reached the necessary 30 signatures to bring it into effect, meaning the special sitting will take place tomorrow, Monday 21 October. The Westminster legislation triggering reform of the laws on abortion and same-sex marriage in Northern Ireland will become operative unless a Northern Ireland Executive is restored by tomorrow, and the recall is a last-ditch attempt to avert that possibility.

The BBC points out, however, that it is not clear if MLAs will be able to debate the abortion law changes because the first thing they must do is elect a Speaker with cross-community support and Sinn Féin MLAs do not intend to be present, while the SDLP was considering its options. And in any event, what the legislation requires is the restoration of a Northern Ireland Executive, not a sitting of the Assembly – and the formation of a cross-community Executive still seems as unlikely as before.

On Wednesday, the Supreme Court handed down judgment in Gilham v Ministry of Justice [2019] UKSC 44, in which it held unanimously that a district judge qualified as a “worker” or a “person in Crown employment” for the purpose of the protection given to whistle-blowers under Part IVA of the Employment Rights Act 1996 and that the Act (and the parallel provisions in the Employment Rights (Northern Ireland) Order 1996, as amended) should be read and given effect so as to extend its whistle-blowing protection to the holders of judicial office.

If readers are wondering what this has to do with “religion”, the answer is this. For the purposes of employment law, a significant proportion of clergy – for example, Church of England incumbents with freehold tenure and Methodist ministers – are, like judges, office-holders rather than workers or employees. So in light of Gilham, if the issue were to arise in future, would whistle-blowing protection be extended to the holder of an ecclesiastical office? Our suspicion is that the answer, probably, is “yes”.

(And might the case have been an instance of Life imitating Art? Paul Magrath suggests that, at the very least, there is an uncanny similarity between the judgment and one of the chapters in Peter Murphy’s new book, Judge Walden: Call the Next Case.)

In Mordel v Royal Berkshire NHS Foundation Trust [2019] EWHC 2591 (QB), Ms Mordel claimed damages for clinical negligence after giving birth to a son with Down’s Syndrome. In June 2014 she had attended the community midwife at her GP’s surgery for her booking appointment and “accepted” all six of the standard screening tests, including combined screening. On 22 July, she attended the Royal Berkshire Hospital for the scan; and there was a dispute between her and the sonographer as to what happened. The sonographer completed the ultrasound report with “Down’s screening declined”. No NT scan was carried out, nor was the second part of the combined test – the taking of blood – which was consistent with her having declined Down’s screening. Nor was the quadruple test offered, though she did undergo a foetal abnormality scan at around 20 weeks’ gestation, which did not give rise to any concerns.

The evidence suggested that there had been a total misunderstanding. Finding in favour of Ms Mordel, Jay J said that, on the balance of probabilities, he had concluded that she would have proceeded to invasive testing had it been made clear to her that there was a high risk of her child having Down’s syndrome [152]. However:

“Nothing I have said in this judgment should be interpreted as suggesting that the birth of a child with Down’s syndrome must be seen as unwelcome. Some parents have absolute ethical objections to termination of pregnancy, and for them, the discussion begins and ends at that point. Other parents accept the possibility of having a baby with Down’s syndrome without a shred of concern or reluctance. The State expresses no judgments either way, but it is the policy of the NHS that Down’s screening must be offered to all expectant mothers, the premise being that many would wish to exercise their right to proceed to medical termination in the event of a diagnosis. These various wishes and decisions must be and are respected without comment” [153].

The BBC reports that Dr Balvinder Mehat has been suspended by the General Medical Council for a month after circumcising a boy in July 2013 when he was three months old and staying with his paternal grandparents, who are Muslim. Dr Mehat failed to seek prior parental consent and when the boy’s mother discovered what had happened she contacted social services and Nottinghamshire Police. After an investigation, the police decided that it was not a criminal matter and the case was referred to GMC.

The common law position still seems to be as set out in Re J (Child’s Religious Upbringing and Circumcision) [2000] 1 Fam (CA) 307, in which Dame Elizabeth Butler-Sloss P stressed the need for parental (not grandparental) consent:

“The decision to circumcise a child on grounds other than medical necessity is a very important one: the operation is irreversible and should only be carried out where the parents together approve of it or, in the absence of parental agreement, where a court decides that the operation is in the best interests of the child” [32].

What’s in a name? – Fañch again

Two years ago, we mentioned a case in Brittany in which a couple from Quimper had been refused permission to register their son’s name as Fañch – the Breton equivalent of François; instead, his birth was registered as Fanch, without the tilde. In September 2017, the tribunal de grande instance at Rennes ruled that name must be written without the tilde because the symbol was “unrecognised by the French language” and authorising its use would amount to a “breach of the will of our state of law to maintain the unity of the country” – in spite of the fact that the name is borne by two famous Breton writers, Fañch Peru and Fañch Broudig.

That ruling was subsequently overturned by the cour d’appel – but the local procurator took the case to Paris. On Thursday, however, in a typically terse judgment, the Cour de Cassation ruled the complaint inadmissible. 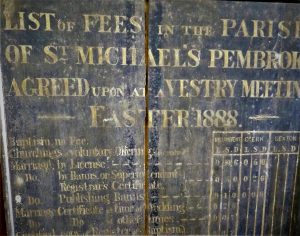 As we await the publication of the Church of England’s Parochial Fees for 2020, during David’s holiday in Wales this week he came across the parochial fees determined at the Vestry meeting of St Michael’s, Pembroke in Easter 1888, a copy of which is here. Using the Bank of England’s inflation calculator to 2018 (the latest data available), the 1888 charges for conducting a marriage would be  £67 for the incumbent and £32 for the clerk. By comparison, the present-day parochial fees include £207 to the Diocesan Board of Finance and £248 to the PCC.