Matthew Chinery posted an end-of-year Twitter thread of his top ten consistory court judgments of the decade – some of which we have noted ourselves. Here it is, rolled up, as a guest post.

Some ground rules: This is a highly personal list, including some selfish inclusions due to my own involvement in a case. Chronological rather than ranking order. And I’ll doubtless have forgotten a really good one. Ready? Here we go!

(1) St Mary the Virgin, Tewkesbury Abbey (2011): A low-key but excellent introduction to Chancellor June Rodgers, who features heavily. A reminder for all incumbents not to p**s off the Flower Guild. Once they had teamed up with the Mothers’ Union, that’s a formidable body of opposition to some minor reordering proposals. The judgment also raises the amusing possibility of standing for election to the PCC on an alliterative “Anti-Apse Alteration” manifesto.

(2) St Mary Pulborough (2012): Consistory courts often turn down designs of gravestones in churchyards. They sometimes order the removal of gravestones erected without a Faculty (always pastorally very difficult). What is more remarkable in this precise instance is that the son of the deceased then invited the local press over, and smashed the gravestone into oblivion with a sledgehammer: 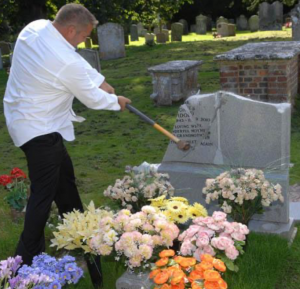 As one might imagine, the Chancellor was rather less than impressed with this and equally unimpressed with the local media’s coverage of it (unsurprisingly, local hacks tend not to understand the minutiae of ecclesiastical legal proceedings)

(3) Re St Mary Bourne Street [2013] London Const Ct. Gau Ch.: In which a parish spends many thousands of pounds on three High Mass sets and then decide they don’t like them (they are ‘gothic’ [gasp], ‘too yellow’ and ‘too dull’ respectively). In spite of the Deputy Chancellor finding that the vestments “to the untutored eye might be deemed sumptuous even to the most jaded of Spanish Cardinals”, a faculty to sell them was granted.

(4) Re St Stephen Walbrook [2013] London Cons Ct: This was my first big case, and it was fascinating from start to finish. What to do with a 5m x 3m painting that doesn’t really go with your new reordering? Wait until you’ve knocked a massive hole in the wall, smuggle it out, wait 25 years, then get a Faculty to sell it for *lots* of money. Well played.

(5) Re St. Giles Uley [2014] Gloucester Const Ct, Rodgers Ch: Our hero Ms Rodgers returns, and is really rather unimpressed by a parish’s failure to follow the correct procedures and processes: “there has been total failure to carry out clear rules and instructions to ensure that this procedure has been carried out properly… “…This, notwithstanding the directions given with what I might describe as child-like clarity to the Petitioners by the Diocesan Registrar…This was a fiasco of the Petitioners’ own making in defiance of the clearest advice.”

(6) Re Emmanuel Church Leckhampton [2014] Gloucester Const. Ct, Rodgers Ch.: Chancellor Rodgers, naturally, in the chair. Nice, but perhaps unremarkable building… At some point post-war they had been gifted a painting. It had happily hung in the Church, before being moved at some point to a side chapel, out of sight, as it was apparently “theologically inappropriate” for the (main) church.

Around 2013 it was moved to the “clutter gathering space” in the Vestry. Astonishingly, it was about to be chucked in the skip, when somebody suggested they might get some money for it. A local valuer suggested £1000, then revised upward to £3/4000. It sold for £20,000, and it is generally thought that the purchaser got a bargain. The only issue is that at no point had any permissions been sought for selling the item. The legal position is clear – title to chattels does not pass without a Faculty. Clergy should know this. Auctioneers should know this. Chancellor Rodgers is on a mission to make sure that everybody knows this. A few choice quotations from the judgment:

“If this faculty is refused, the Priest in Charge and the Church Wardens [sic] might expect to be sued personally by the auctioneers and the ‘buyer’ for their losses, including the Priest in Charge facing a very unpleasant dispute as to what she did or did not say about … permission to sell to the auctioneers.” … “They have been really, really stupid. But they have not been dishonest. In their misguided way, they supposed, albeit erroneously, they were acting for the good of the Church.”

But a few quotations cannot do justice to the full 55-page tour de force that is this judgment.

(7) Re St Leonard Beoley [2015] Worcester Const Ct, Mynors Ch I can summarize this one in a single tweet: “No, you can’t borrow William Shakespeare’s skull” (Spoiler alert – it almost certainly isn’t actually Shakespeare’s skull). A similar case relating to King Harold was heard a decade or so earlier. Historical curiosity is not usually considered enough to disturb somebody’s final resting place for DNA testing.

(8) Re St. James Kidbrooke [2016] ECC Swk 16: Lots of churches have mobile phone masts in the tower. Nice little earner, out of sight, a good tall place for them to be. They are occasionally controversial, either for heritage reasons or for perceived risks to health. This one attracted the attention of a local resident who has built a home-made Faraday Cage and spends up to 15 hours a day in it. The Consistory Court rule is that churches should be held to no higher (or lower) standard than a civil building in relation to phones and health risks ­ masts must pass all the relevant emissions tests – but will then usually be permitted. The judgment is a really good example of a Court doing its best to help a litigant in person, but exasperation does occasionally creep to the surface of the text…

(I acted in this case and I was accused of “dressing as a Barrister” by the objector. The indignity! – it was a solicitor’s gown…)

(9) Re Christ Church Spitalfields [2017] ECC Lon 1: Undoubtedly the longest-running and most expensive saga of the decade. It has resulted in two appeals, a legislative change, and at the end of it all, only an interim solution. A 19th Century statute made it illegal to build on a disused burial ground (other than to build a church or an extension to a church). This had seemingly been ignored in the post-war years when a building was erected in the Spitalfields Churchyard. It was somewhat glossed over, too, when that building was replaced with a new building (slightly larger footprint) – until the thing had been largely built. A Faculty had been granted for the building, but the application forms had suggested that the site was not a burial ground.

When objectors asked the Chancellor to rescind the Faculty and order the demolition of the building, he refused (rather bluntly). That decision was overturned on appeal. The Court of Arches ordered that the case be reheard by the Consistory Court, but with a different Chancellor. Whom to call upon for such a controversial situation? You may be able to guess. Sadly, this was not Chancellor Rodgers’ finest hour. 497 pages, only to be overturned on appeal (Consistory Court judgments are usually 2-20 pages!). Nevertheless, there are some characteristically brutal takedowns in this one, so if you have a spare few hours, it’s a fun read.

The current status is that the Court of Arches has ordered that the building be torn down, but suspended enforcement of the Order for several years. This ensures that the huge amounts of money spent on it is not entirely wasted. The building itself has won a load of architecture awards – it’s a desperately sad story, all told. And the law has now been changed, to allow buildings to be built on burial grounds, under certain conditions (as has been the case for unconsecrated burial grounds for 40+ years), with a Faculty. But that does not, the Court of Arches found, apply retrospectively.

(10) Re St Oswald Filey [2019) ECC Yor 8 ­– the case that inspired this thread: Unlawful Methodist burial in Church of England Churchyard, closed due to lack of space? Check. Threat that the coffin would be “left on top” of grave if permission not given? Check. Detailed and forensic analysis of whether the key conversations between protagonists had, in fact, taken place “over a cup of tea”? Check. Funeral director hauled over the coals by deeply unimpressed Chancellor, and made to pay the costs of the case? Check. The interred body has been allowed to rest in peace, which I think clearly was the right pastoral outcome. This one has all the makings of a West End farce. A masterpiece.

And so we reach the end of our voyage of jurisprudential discovery. I’ve chosen some of the weirder ones, but there are dozens of cases every year. They mostly deal with the humdrum of alterations, restoration etc to our church buildings, such a core part of the nation’s built heritage.

3 thoughts on “The Top Ten consistory court judgments of the decade?”