The Church of England General Synod in February 2020 will consider a Measure which will enable the transfer of episcopal oversight of the Channel Islands to Diocese of Salisbury. 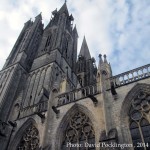 On 9 October 2019, the Church of England issued the Press Release Channel Islands Commission publishes recommendations which stated that the Archbishop of Canterbury’s Commission on the relationship of the Channel Islands to the wider Church of England had published its final report; this included a recommendation that episcopal oversight of the Islands should be transferred to the Bishop of Salisbury. Our post included links to:

Unusually, the Synodical component of the transfer process is planned to take place within a single group of sessions, and time has been allocated to its consideration: Monday 10 February for First Consideration; Tuesday 11 February for the Revision Stage; and Thursday 13 February for Final drafting and Final Approval. General Synod has been circulated with the following papers:

Extracts from the Explanatory Notes are reproduced below [Emphasis added].

2. The Draft Channel Islands Measure has been introduced in the Synod on the instructions of the Archbishops’ Council. It gives effect to the above recommendation of the Archbishop’s Commission by providing for the Islands to be attached to the Diocese of Salisbury by Order of Her Majesty in Council.

3. The Measure makes new provision to simplify the process for applying existing Measures to the Islands. It also makes minor and consequential amendments to other legislation.

4. At the request of the Archbishops’ Council, the Business Committee has made provision in the Agenda to enable all of the Synodical stages for the Measure to be taken at the February 2019 group of sessions.

6. There is no prerogative power under English law to alter the extent of dioceses or to change episcopal jurisdiction. For the purposes of English law, the statutory power in clause 1 is therefore needed notwithstanding the prerogative powers Her Majesty has in respect of the Islands.

7. The changes provided for in the Measure will not take effect in the Islands until after the consents of their respective legislatures have been obtained. The Measure does not set out the processes for obtaining the consent of the Islands’ legislatures to the making of Orders in Council. There are established processes for that purpose which involve the Islands’ legislatures approving the terms of a draft Order in Council prior to its being submitted to the Privy Council Office. Those processes will be followed in respect of Orders to be made for the purposes of the Measure.

8. Clause 1(2) to (5) makes provision for defining the term ‘the Bailiwicks’ that is used in the Measure to take account of the Islands’ particular territorial jurisdictions.

9. Clause 1(6) enables the attachment of the Islands to the Diocese of Salisbury, and the transfer of episcopal jurisdiction, to be achieved by a single Order in Council applying to both the Bailiwicks, or by two Orders, one for the Jersey Bailiwick and one for the Guernsey Bailiwick.

10. Clause 1(7) provides that an Order in Council may make consequential, supplementary, transitional or transitory provision.

12. Clause 2 makes amendments to other Measures that are necessary in consequence of the attachment of the Islands to the Diocese of Salisbury and the transfer of jurisdiction to the Bishop of Salisbury.

14. Clause 3 will enable any existing Measures to be applied to the Islands more simply, under processes the Islands have created – or will create – under the law of their respective jurisdictions.

16. Clause 4 makes amendments to the Channel Islands (Representation) Measure 1931 (‘the Representation Measure’) to bring the provisions relating to the
Islands’ church electoral rolls up to date, so that they make equivalent provision to the Church Representation Rules.

20. Clause 5(1) provides for sections 1 and 3 to come into force on the day on which the Measure is given Royal Assent. Orders in Council can then be made at any time after that. The Islands will also be able to proceed immediately to apply any existing Measures under their own legal processes.

24. At the request of the Archbishops’ Council, the Business Committee has allocated space in the Agenda so that all the Synodical stages for the Measure can be taken at the February 2020 group of sessions. The Council made the request for the following reasons.

25. First, the Measure is narrowly focussed in policy terms. The question is essentially whether the Islands should be attached to the Diocese of Salisbury. As the answer to that is either in the affirmative or the negative, there would be no detailed questions of policy to be considered by a revision committee. For the same reasons, there would not seem to be any need for several months to elapse between the Revision Stage in Full Synod and the Final Approval Stage to enable members to consider further whether they support the Measure. On that basis, it is unlikely that any advantage would be gained by spreading the various stages of the Measure over two or more groups of sessions.

26. Secondly, the Archbishops’ Council, the Islands and the Diocese of Salisbury wish to progress matters as soon as reasonably possible. The recommendations in the report of the Archbishop’s Commission have been endorsed by the Deanery Synods of Jersey and Guernsey and by the Salisbury Diocesan Synod. No objection has been raised by the Diocese of Winchester. The Islands have been under temporary episcopal care for a number of years. Until the question of the transfer of the Islands to the Diocese of Salisbury is decided, the Islands are effectively in a state of suspension with only ad hoc arrangements for episcopal ministry and without the ability to plan for the future, in particular the future mission of the Church of England in the Islands. Important decisions concerning the Church in the Islands are unlikely to be taken until the question of transfer to Salisbury has been decided.

28. If that motion is carried, the Revision Stage will take place during the afternoon sitting on Tuesday 11 February. The Synod will consider the Measure clause by clause together with any amendments of which notice has been given. The deadline for giving notice of an amendment is 5.30 p.m. on Wednesday 5 February. An amendment of which due notice has not been given may be moved only with the permission of the Chair.

On Thinking Anglicans, Peter Owen notes that not everybody agrees with the proposal; he reproduces a paper by Simon Cawdell, a Synod member from Hereford, The triumph of management theology: Why we should not transfer the Channel Islands to Salisbury, which has circulated amongst some Synod members; and also the response The Channel Islands Measure [GS 2152] from the Deans of Guernsey and Jersey, who are the senior clergy on the islands.

4 thoughts on “Channel Islands transfer to Diocese of Salisbury”