Review of the ecclesiastical court judgments during March 2020

A total of twelve consistory court judgments were circulated in March, and the seven featured in the first part all relate to Reordering, extensions & other building works. This second part reviews the remaining five judgments on 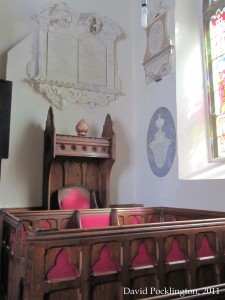 Council Business and CFCE Determinations, as well as links to other posts relating to ecclesiastical law. Part I included a summary of the changes which had been introduced on 1 April 2020 through The Faculty Jurisdiction (Amendment) Rules 2019 come into force; this post continues this theme and summarises the changes which have been made as a consequence of the restrictions imposed by the coronavirus provisions.

The Advice by the Archbishops’ Council Cathedral and Church Buildings Division Securing and caring for your church buildings during the Covid-19 pandemic: advice for incumbents, churchwardens and PCC members was issued on 27 March and reviewed in our post Church building maintenance during lockdown . A revised version of the Advice was issued on 3 April 2020.

In addition to the above, the Chancellor of the Diocese of St Edmundsbury and Ipswich has temporarily suspended the reservation of grave spaces as from 1 April 2020, (scroll down).

of an elderly and infirm gentleman in Ireland, a Mr. Cunningham, who wished to have the remains of his mother exhumed and reinterred in the Roman Catholic churchyard in Ireland next to the place where he was proposing to be interred. The Chancellor stated the he had seen a written and signed request from him that Patricia Boycott should act for him to apply for the faculty. In such a capacity, he considered that she is a person with “a sufficient interest in the matter” to justify her acting as petitioner who may seek and obtain the faculty, under Rule 5.2 Faculty Jurisdiction Rules 2015 as amended [3].

Mr Cunningham sought an order permitting the exhumation of the remains of his mother and their subsequent re-interment in the churchyard of St Patrick’s, Glenamaddy, County Roscommon, where he in turn intends to be buried [15]. Essentially,  his reasoning is threefold [16]:

(a) the deceased was a practising Roman Catholic and it would have been her wish to be buried in a Roman Catholic rather than an Anglican churchyard or cemetery;
(b) she had come back to Ireland to try to find Paddy Cunningham and to be reunited with him; since he was, and is, her only child, and has always lived on Irish soil, she would have wanted to be buried with him, and
(c) she has no relatives, and now no friends, in Leicester, and her grave is untended accordingly.

The Chancellor considered that there were special circumstances justifying him in granting a faculty, subject to there being no objection from Mr. Cunningham’s mother’s brother, if still alive. [Re Saffron Hill Cemetery [2020] ECC Lei 1] [Back] [Top]

Re St. Thomas a Becket Lovington [2020] ECC B&W 1 The subject-matter of the petition was a piece of unconsecrated churchyard between the original churchyard and an adjacent lane. The priest and churchwardens sought to release a small strip of land at the North West corner of the churchyard into an adjacent trackway, and to grant a long lease of the strip to the owners of the nearby Beckets Barn, a residential property whose owners use the trackway, and also have title to some undeveloped land to which the trackway gives access [1]. The Parties Opponent also own land in the immediate vicinity of the church; two of their number jointly instructed solicitors to act for them, and two further family members submitted letters of objection without becoming parties to the proceedings [2].

Despite the lengthy written representations for which much of the material included provided a useful background, “in many respects their contentions (as this judgment will explain) are wide of the mark”. The Chancellor therefore concentrated upon the relevant issues without necessarily addressing every point which had been taken for or against the proposal [4].

The judgment contains a discussion of the court’s jurisdiction to permit the disposal of unconsecrated churchyard land, and this will be discussed in more detail in a subsequent post. The Chancellor determined that the terms of the proposed lease would benefit both the neighbour and the church, and he granted a faculty.  [Re St. Thomas a Becket Lovington [2020] ECC B&W 1] [Back] [Top]

At the Privy Council meeting on 11 March, under the Burial Act 1853 as amended, and subject to the standard exceptions and as identified on the attached maps, burials are to be discontinued in: Holy Trinity Churchyard, Calne,  Wiltshire; and St Michael and All Angels’ Church, Leafield, Witney, Oxfordshire. “Her Majesty in Council is pleased to give Notice of these representations and to order that they be taken into consideration by a Committee of the Privy Council on 22nd April 2020”.

Re St. Michael & All Angels Fenny Drayton [2020] ECC Lei 2 The petitioner applied for a confirmatory faculty permitting the continued presence in the churchyard of a memorial made of white marble 55 centimetres high in the shape of a cross, with some heart motifs and a brass plaque on it. The memorial did not comply with the churchyard regulations. Neither the Diocesan Advisory Committee nor the Parochial Church Council approved of the memorial.

The Chancellor dismissed the petition and directed that the stone should be removed by the petitioner within 2 months, in default of which the stone should be removed by the incumbent and churchwardens [14]. However, the Chancellor gave the petitioner 14 days in which to apply in writing with reasons why the order should not be enforced and that the dismissal of the petition should remain on hold in the meantime [15]. [Re St. Michael & All Angels Fenny Drayton [2020] ECC Lei 2] [Back] [Top]

Re St. Michael & All Angels Blaisdon [2020] ECC Glo 3  The petitioner, a parishioner, whose parents and grandparents were buried in the churchyard, wished to reserve a grave space for herself and her partner. The Parochial Church Council, a few days before the date of the petition, had, without giving notice to parishioners, decided to adopt a policy of no grave reservations, even though there was said to be enough room in the churchyard for burials for the next 50 years. The Chancellor was satisfied that the petitioner had made a good case for the reservation of a grave and granted a faculty.

Although extending to 43 pages in length, readers should not be deterred from reading the entire judgment. This is one of the last judgments delivered by Chancellor June Rodgers before her retirement; in addition to a detailed analysis of the case law on the reservation of grave plot, includes observation that “even within the Church of England, there are procedures to accommodate democratic dissent” [12], and other typical wry asides. [Re St. Michael & All Angels Blaisdon [2020] ECC Glo 3] [Back] [Top]

Re St. Mary Haddiscoe [2020] ECC Nor 1 The Petition, which concerns arboreal management in the churchyard, “has aroused strong feelings” [1]. The petitioners sought to fell one holly tree, not because it is unviable, but because its roots are damaging a table-top memorial tomb of 1792 containing the mortal remains of John
Elliott, Suzanne Elliott (his wife) and Martha, their young grand-daughter, whose living descendants  do not want the tomb disturbed [2]. Less problematic were the proposals to fell one ash tree and to reduce the crown of two further holly trees. [An explanation of “crown reduction” and “crown thinning” here].

“[i]n practical terms, having read both the report of [the firm of arboriculturalists] and further observations in correspondence, it is clear…that there are only two realistic proposals as far as the Chartered Foresters and Consulting Arboriculturists are concerned: namely removal of the tomb or felling of the tree. I am told and accept expert opinion that removal of the Holly Tree would be unlikely to succeed”.

There were two letters of objection, the writer of one who “opines that [the gravestones] could be removed with no real damage and at much less cost”, and “invites the Church (the court) to take a more environmentally aware approach”. Whilst she also stated that there should be a Tree Protection Order (TPO), the Chancellor noted “TPOs are not a matter for the court and there is no TPO [5]. With regard to the question of whether the preservation of the tomb and the remains in situ should take precedence over the fate of the Holly Tree or vice versa, he commented:

“[9]. …reference [by one of the complainants] to “some grave stones” somewhat understated the true position, but then, of course, they are not the remains of her ancestor(s). These remains in that distinctive table top memorial have lain there undisturbed since 1791. They contain the mortal remains of three people including a three-year old child. The senior living member of that family, himself elderly and in frail health, finds the thought of disturbing their remains very distressing.

[10]. One of the principal functions of maintaining a churchyard is to protect the memorials and remains whose last resting place is within it. Trees are an important part of a churchyard and in most cases the two live happily together.

[11]. In order to preserve the tree, it would be necessary to try and move the memorial (if that was even possible) and exhume the mortal remains of the three people buried there. Exhumation is only rarely granted by the court and then in exceptional circumstances. Burial, according to the Christian faith, is both final and permanent within the capabilities of human beings to order things. Exhumation of remains buried two hundred and twenty-nine years ago, may pose many difficulties in practice even if it was acceptable in principle”.

“[18]. I agree to the petitioners request, supported by the recommendation of
the Diocesan Advisory Committee (DAC) to fell holly tree T 1523 which is damaging the memorial, I agree to the request to fell the ash yree T 1539, but I do not at this stage give permission to reduce the crown of the two holly trees (T 1534) notwithstanding the recommendation in its favour from the DAC but am willing to consider an alternative, and more modest, proposal.

19. I impose a condition that suitable replacement trees for those to be felled are planted in locations advised by the arboreal consultants to reduce any loss to biodiversity.