“Of the many judgments I thought I would have to make as Chancellor I never thought one would involve trying to fathom whether a pigeon would be caused more suffering from the unshakeable (but wholly wrong) belief that his roost was both on fire and exuding unpleasant odours or from the unshakeable (but wholly true) belief that if he returned to his roost he would receive a disconcerting and mild electric shock to his feet. Such, however, is the glory of the Faculty jurisdiction.“

A couple of weeks ago, Bristol Live carried the headline “Judge gives Bristol church permission to electrocute pigeons, and suggested that the problem with pigeons in the North Porch had evolved since ‘Tom the Church Cat’ died in 1927. The “special and rarely called Church of England Diocese Consistory Court” (sic) cited referred to the judgment in Re St Mary the Virgin Redcliffe [2020] ECC Bri 1, the topic of this post. The issues involved brought back memories of David’s environmental work on London Underground, and of one of the options then available, immortalized in Tom Lehrer’s Poisoning Pigeons in the Park. However, the “drastic move” described in Bristol Live stopped short of extermination and the modus operandi favoured by the petitioners was “a similar way to an electric fence for cattle”. So that’s OK then, or is it, asked the court? 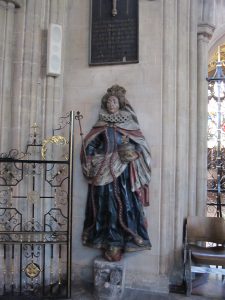 Redcliffe as “the fairest, goodliest and most famous parish church in England”. Further comment would seem superfluous, and the 10-page judgment is not unnecessarily lengthened by an extract from the church’s Grade I listing which features “[t]he important N porch with its unusual hexagonal plan and rich ornamentation”.

“The problem that the Church has encountered is not uncommon. Pigeons have discovered that this lovely church is an ideal place to escape inclement weather and to provide a safe space to nest. The petitioners put it this way”:

“The north porch has suffered from pigeon problems for a number of years. The porch itself provides a number of readily accessible perching points as well as dry and warm nesting sites. When pigeons select nesting locations, reproduce and subsequently raise young the newly born young birds are highly likely, once sexually mature, to return to the same location to raise their own family. With no external intervention the pigeon problem becomes ever more significant.

Problems with pigeons include fouling which is unsightly, which can also cause a slip hazard and in larger amounts can cause diseases. Instances of birds fouling directly on users of the church could occur. 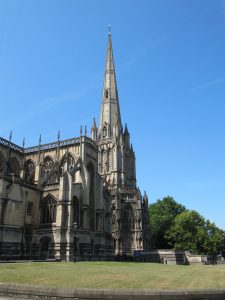 The petitioners had tried a number of options to deter the pigeons including: trapping; provision of spikes and gel; shooting; and netting: “[t]he perfect solution is to deny access to the roosting and nesting sites – simply put in this case would be to keep the north porch doors closed at all times. Clearly this is not an acceptable solution. Therefore a combination of exclusion and deterrent systems is felt be required and appropriate”.

With regard to the shooting option, Chancellor Gau warned:

“There are also concerns that shooting pigeons outside the church would have the potential to create an ‘adverse reaction from members of the public’. The implication of that is that the shooting of pigeons inside the church has not caused an ‘adverse reaction’. I have to admit in passing that I am impressed by the sang froid of a congregation that apparently does not react adversely to guns being discharged inside its church. It gives a startlingly fresh insight into the phrase ‘the Church militant here in earth’…however under the terms of the Wildlife and Countryside Act 1981 killing pigeons even with a ‘General Licence’ other than ‘…for the preservation of public health and public safety’ would be illegal. They should also be alive to the fact that General Licences to kill pigeons are not being issued until further notice” [4].

The petitioners proposed that a composite pigeon-deterrent system should be installed including: the 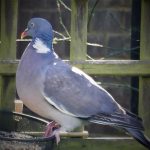 renewing of bird spikes and gel, but coupled with a device which has the tradename AvishockTM – an ‘ultra-low profile rubberised track with conductor strips/rails on the upper surface. The track is fitted to an energiser which feeds a 5000v electrical 9ma current’, and is said to “works in a similar way to an electric fence for cattle.’  When pigeons (or other birds) land on the conductor strip they are given a very small but disconcerting electric shock. This shock is sufficient to make the pigeons leave the areas that they have landed on and, importantly, persuades them not to return” [5].

The DAC expressed its concerns regarding the legality of the AvishockTM system, but deferred to the Chancellor’s judgement [6]. Advice provided by the Bristol Council “[appeared] to be contradictory and…clearly caused the DAC and the petitioners a deal of concern” [8]. Having considered S1 Wildlife and Countryside Act 1981, the Chancellor was of the opinion that any prosecution would most commonly be brought under the Animal Welfare Act 2006 on the grounds of causing ‘unnecessary suffering’, on which some guidance was available in the accompanying Explanatory Notes relating to section 4 [12, 13]. 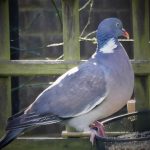 The petitioners provided some documentation including a paper by Defra The risk of bodily injury to birds landing on an electrified bird deterrent’ (2008), which proved to be of limited assistance [14,15], and advice from Rezarf limited “the best pest solution” [16]. However, the latter’s “enthusiastic encomium” was rather undermined by a brief email from the RSPCA to the petitioners indicating that it did not support AvishockTM, which did not state why; in particular whether this was on account of unnecessary suffering to pigeons [17, 18].

The Chancellor described the task before him:

“[19]. I have to decide on the rather limited evidence I have whether the electric shock produced may cause a pigeon or other bird ‘unnecessary suffering’, and if so, whether that suffering is necessary for the protection of persons or property or whether the suffering could have been avoided or reduced.

The literature refers to the effect of the system as being to ‘disconcert’ the pigeons. It is a little hard for me to fathom the existential angst of a feral pigeon and to know whether being ‘disconcerted’ could be considered suffering, let alone ‘unnecessary suffering’”.

With regard to pigeon repellent gel which is lawful, reasonably effective and apparently unobjectionable, the petitioners described its operation [19]:

“The gel is placed in a plastic dish at approximately 450mm centres. The [gel] gives off a UV light which is invisible to us but to the pigeons, it looks like the building is on fire! The gel also contains oils that the pigeons don’t like”.

However, Chancellor Gau was assisted by the paper by Frank Hurnik and Hugh Lehman, Unnecessary suffering: Definition and evidence. International Journal for the Study of Animal Problems, (1982) 3(2), 131-137. Referring to the paper he concluded:

“[24] . In my judgment, ‘suffering’, in the widest sense, would be caused to a pigeon. That must be the case or the system would not work. The evidence is that the electrical stimulus causes them to move away from an area and not return …

[26]. I take the view that this definition of ‘unnecessary’ is broadly in line with the statutory definition set out in paragraph 13 above [on the application of S 4, (3)  Animal Welfare Act 200.

In granting the petition, he said:

“27. In my judgment the suffering is not ‘unnecessary’. The conduct cannot reasonably be avoided in the particular circumstances of this case. There is damage being caused to a grade I listed church and there is the chance of distress being caused to those people who have to cope directly or indirectly with the fouling of the birds. Other methods of pest control have been tried and found wanting.

I am satisfied that any suffering caused would be for a legitimate purpose as identified by the Statute, that is the protection of property. In my judgment the suffering is proportionate to preserve the building and to avoid distress to staff, visitors to the church and members of the congregation. In my judgment, having seen the application and assessed all the evidence presented to me, the conduct would be that of a reasonably competent and humane person”.

1 thought on “Poisoning pigeons in the porch?”