Another guest post from the Weddings Team at the Law Commission on the proposals for the reform of weddings law in England & Wales.

On 3 September 2020, we published our consultation paper Getting Married: A Consultation Paper on Weddings Law. The full paper together with a shorter summary and further details about the project are available on our webpage here. In the consultation paper, we propose an entirely new scheme of weddings law. Our provisionally proposed scheme could be described as an officiant scheme, which would replace the current buildings-based approach. It would govern all weddings, including religious and civil wedding ceremonies (and, if permitted, weddings conducted by non-religious belief organisations and/or independent celebrants).

In this second blog, we highlight elements of our scheme that are of particular relevance to non-Anglican religious groups (having already discussed the proposals most relevant to Anglicans in a blog posted on 11 October 2020).

Giving notice is an important part of the process of getting married, and would under our proposed scheme be essential to the validity of a marriage. Before a religious wedding ceremony could take place, the couple would be required to give notice to the registration service (with couples having an Anglican wedding potentially being able to continue to give notice to the Anglican church).

Our proposals aim to bring the process for civil preliminaries into the modern day, while ensuring that they continue to provide protection against forced and sham marriages.

First, we suggest eliminating the residency requirement in order to facilitate weddings in England and Wales of couples who live overseas and to enable couples to attend the register office most convenient for them.

Second, we propose dividing the process of giving notice into two steps. The first step would involve each of the couple providing information about themselves either online, by post or in person in a register office. This step would start the 28-day waiting period. Once notice was given, notices of marriage would usually be displayed online. The second stage – which would only be necessary if notice had not been given in person – would be an in-person meeting with a registration officer to verify the person’s identity and capacity to marry, and to provide the registration officer an opportunity to assess whether there was a risk the marriage was forced or an immigration sham. This meeting would be required to take place a certain period in advance of authority to marry being given, and we are interested in hearing people’s thoughts on what that period should be. Our aim is to make the process more convenient but at the same time more effective in identifying potential problems.

Once the preliminaries had been completed by both parties, a document (the ‘schedule’) would be issued authorising the wedding to go ahead.

Under our scheme, every wedding would have to be attended by an officiant. We envisage different categories of officiant conducting different types of weddings and our focus here is solely on those nominated by non-Anglican religious groups.

To nominate officiants, a religious body would have to meet the description of a religion set out by the Supreme Court in Hodkin: “a spiritual or non-secular belief system, held by a group of adherents, which claims to explain mankind’s place in the universe and relationship with the infinite, and to teach its adherents how they are to live their lives in conformity with the spiritual understanding associated with the belief system….”

Once it met these requirements, the group could be a nominating body and nominate individuals – or potentially all holders of a specific office – to be authorised as officiants. To be authorised, officiants would have to be fit and proper persons. To be considered fit and proper, the person would be required to have undertaken relevant training, which could be established in a number of ways: for example, by training as, or having performed the role of, a minister, priest, rabbi, imam or other religious official; having legal responsibility to register marriages under the current law; or having specifically trained as a wedding officiant.

Every officiant would have the same legal duties and responsibilities. These would be to ensure that the parties freely express consent to marry each other; that the other requirements of the ceremony are met (i.e. the requirement for two witnesses); and that the schedule is signed after the ceremony has taken place. Officiants would also be responsible for upholding the dignity and solemnity of marriage.

Weddings would be legally permitted to take place in any location, so long as the officiant agreed to it. In agreeing, the officiant would be responsible for considering the safety and dignity of the location.

The ceremony would take place according to such form and ceremony the couples and officiant agreed. The only requirements would be that the parties each express consent, in the presence of the officiant and two witnesses, and signed the schedule. The couple would not have to repeat prescribed words, and the ceremony would not be required to take place with open doors.

In making these provisional proposals, our aim is for the law to recognise the religious ceremony as the ceremony that creates a legal marriage (assuming, of course, that the couple has given notice). We think these proposals would allow all religious wedding ceremonies – in all their diversity – to be recognised by the law.

Of course, religious groups could impose their own requirements in relation to whose weddings they would conduct, the form the ceremony would take, and where it could take place. If they wished, religious groups would be able to insist that their ceremonies continue to take place exclusively in their places of worship.

The special provisions in the current law, under which religious organisations can only conduct same-sex marriages if they opt into doing so, would continue under our proposed scheme, in keeping with the Terms of Reference of this review.

Our project also considers the validity of ceremonies that do not comply with some or all of the requirements in our provisionally proposed scheme. Our scheme aims to uphold marriages wherever possible. We also seek to bring clarity to the law, and so certainty to couples, about which factors would not affect a marriage’s validity, which factors would render a marriage void, and in what circumstances a ceremony would be non-qualifying. We also aim to make the law fair in this area, so that the consequences of failures to comply would be the same, regardless of the type of wedding.

Although we do not think that all religious ceremonies can be treated as having legal consequences, simply by virtue of taking place according to religious rites, we seek to ensure that ceremonies would at least be void (rather than non-qualifying) if one of the parties believed that the ceremony would have legal effect. Specifically, we provisionally propose that a marriage would be void if the couple failed to give notice, but the ceremony took place in the presence of a person that at least one of the couple believed to be authorised. 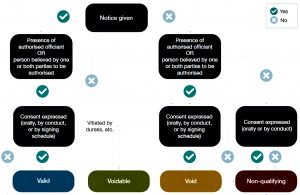 We aim, in our provisional proposals, to strike the right balance between protecting the interests of the state, which includes legal certainty about who is married and who is not, and the wishes of individuals. This means that there are limits to our proposed reforms. As we explain in the consultation paper, our initial view is that there are circumstances in which we think it is right that a religious ceremony is classified as non-qualifying, even though this might cause hardship to the financially weaker party (often the woman) if the relationship breaks down. This is not because we do not think that a legal remedy should be available in these cases.  But we think that the need for a remedy in these cases derives from disadvantages suffered during the relationship rather than from the ceremony itself. Addressing this problem falls outside the scope of what can be achieved by reform to weddings law. We appreciate that couples who have been married in the eyes of their faith will not consider themselves to be cohabiting; however, reform of the law relating to cohabitation – to create a mechanism to enable disadvantage suffered during a relation to be redressed – would be able to ensure protection of those whose religious ceremonies have no legal consequence.

We very much welcome written consultation responses from anyone with views on our provisional proposals. Our consultation is open until 3 December 2020, and the response form is available here.

1 thought on “Getting Married: A Consultation Paper on Weddings Law #2”