In which a second lockdown was announced for England from Thursday.

On Saturday, the Prime Minister announced a second national lockdown in England, beginning on Thursday and ending on 2 December. People in England must stay at home except for essential shopping, exercise and to provide essential care for others, and work from home if at all possible. Schools and universities would remain open. He said that it was not the full lockdown of March and April but the message was the same: “Stay at home and save lives”.

The Government guidelines for places of worship are as follows:

This was the response of the Catholic Bishops’ Conference of England and Wales:

“Whilst we understand the many difficult decisions facing the Government, we have not yet seen any evidence whatsoever that would make the banning of communal worship, with all its human costs, a productive part of combatting the virus. We ask the Government to produce this evidence that justifies the cessation of acts of public worship.”

Equality and Human Rights Commission: antisemitism in the Labour Party

“points to a culture within the Party which, at best, did not do enough to prevent antisemitism and, at worst, could be seen to accept it. This is in direct contrast to the comprehensive guidance and training in place to handle sexual harassment complaints that demonstrate the Party’s ability to act decisively when it needs to, indicating that antisemitism could have been tackled more effectively.”

The full report is here.

In Veselības ministrija [2020] EUECJ C-243/19, the Supreme Court of Latvia sought a preliminary ruling on the interpretation of Article 20(2) of EU Regulation No 883/2004, which determines the conditions under which the Member State of residence of an insured person who requests authorisation to travel to another Member State to receive healthcare is required to issue that authorisation, and, consequently, to assume the costs of the healthcare received in the other Member State, and of Article 8 of Directive 2011/24, which concerns the systems of prior authorisation for reimbursement of cross-border healthcare, read in the light of Article 21(1) of the Charter of Fundamental Rights of the European Union – which, inter alia, prohibits any discrimination on grounds of religion.

The applicant was a Jehovah’s Witness whose son required open-heart surgery which could only be carried out in Latvia with a blood transfusion. The applicant requested that the Latvian national health service should authorise the operation to be carried out in Poland, where it could be performed without a transfusion – but the request was rejected. An action against the health service’s refusal was unsuccessful, as was an appeal. In the meantime, the son had heart surgery in Poland without a transfusion. The Supreme Court sought clarification as to whether or not the Latvian NHS had been entitled to refuse to bear the costs of the treatment in Poland on the basis of solely medical criteria, or whether it was also required to take account of the applicant’s religious beliefs.

The Court noted that that the refusal to grant the prior authorisation provided for in Regulation No 883/2004 introduced a difference in treatment indirectly based on religion or religious beliefs. It concluded that Article 8(5) and (6)(d) of Directive 2011/24/EU on the application of patients’ rights in cross-border healthcare, read in the light of Article 21(1) of the Charter of Fundamental Rights, must be interpreted as precluding a patient’s Member State from refusing to grant that patient the authorisation provided for in Article 8(1) of that Directive where hospital care, the medical effectiveness of which was not contested, was available in that Member State even though the method of treatment used was contrary to that patient’s religious beliefs unless that refusal was objectively justified by a legitimate aim relating to maintaining treatment capacity or medical competence and was an appropriate and necessary means of achieving that aim – which was for the referring court to determine. [With thanks to Howard Friedman.]

The BBC reports that a petition has been launched calling for a House of Commons debate on the registration of births in cases where the child’s father is not married to the mother and has died before the birth. Jasmine Hill, whose partner Kyle Averis died in July 2015, six months before their son Harley was born, found that she required a declaration of parentage order from the court to have his name added to the birth certificate – at a cost of £255. She wants the law changed to accommodate cases in which there is no dispute as to the newborn’s parentage and she would like a deceased father’s parents to be able to represent him in the registration process.

General Assembly of the Church of Scotland

The Church of Scotland has announced that Lord Wallace of Tankerness QC, Advocate General in David Cameron’s Coalition Government and a former Deputy First Minister of Scotland, is to be the next Moderator of the General Assembly, as from May 2021. Jim Wallace is only the second elder in modern times to be appointed as Moderator: the first was Alison Elliot in 2004. He was ordained as an elder in 1981 and has been a member of the Kirk Session of St Magnus Cathedral since 1990.

On 31 October we posted our round-up, Ecclesiastical court judgments – October. Although there were only four consistory court judgements, including two “late entries” from the previous day, it includes additional material on CDM Decisions and Safeguarding, Privy Council Business, and CFCE Determinations, in addition to links to other October posts relating to ecclesiastical law. Of the consistory cases reported, the short three-page judgment Re St Mary West Chiltington [2020] ECC Chi 6 is notable in providing a clear example of “snatching defeat from the jaws of [potential] victory” where “the Petitioner [did] not appear to have taken earlier advice to consult an ecclesiastical law specialist” [3] or even that of the local firm of stonemasons [7]. Similarly, the objector to Re St Michael the Archangel Emley [2020] ECC Lee 2, which concerned a “straightforward and uncontroversial matter, namely the repair of a wall which fell in or about 2014” [6], sought to frustrate the granting of a faculty which would ultimately have been to her advantage [7].

ELS Virtual Conference – The Solemnization of Matrimony: past, present and future

ngs are now open for the Ecclesiastical Law Society’s Annual Conference on 20 March 2021: The Solemnization of Matrimony: past, present and future. It will cover the covenantal and contractual nature of marriage from a historical perspective, the legalities of marrying in accordance with the rites of the Church of England, and the Law Commission’s proposals for reform of marriage law in England & Wales. There will also be an exploration of the pastoral opportunities arising from Anglican weddings. Free to Members; £5 for non-members.

On 26 October, Thirty:One Eight published An Independent Learning Review: The Crowded House, a report commissioned by the current elders of Crowded House church following an article in Christianity Today in February 2020; this reported allegations from several individuals against Steve Timmis, together with concerns about the wider church culture. The February article stated that fifteen people who served under Steve Timmis described to Christianity Today a pattern of spiritual abuse through bullying and intimidation, overbearing demands in the name of mission and discipline, rejection of critical feedback, and an expectation of unconditional loyalty.

The report is summarized in an article in Christian Today, Steve Timmis’ church ‘truly sorry’ for ‘pattern of coercive and controlling behaviour’ which states that “[it] stresses that while no criminal or illegal behaviour took place, there was a culture of “heavy-handed leadership” and a lack of accountability”. In a statement, the current elders of Crowded House said they “fully and wholeheartedly” accept the conclusions of the learning review: “From the review, there is evidence of a pattern of coercive and controlling behaviour in the name of our Christian vision and ministry, and evidence that in some instances people have experienced significant emotional and psychological harm”.

Justin Humphreys, Chief Executive (safeguarding) at Thirty:One Eight, said there were lessons to be learned for the wider Church:

“This review has been commissioned by The Crowded House and the learning is primarily for them to take forward. However, there is also learning for the wider Church, and we would encourage all church leaders to take time to read this report and consider what lessons might be of value in their own areas of responsibility and across the wider church.”

We don’t normally do this, but it did take us such a long time to write… 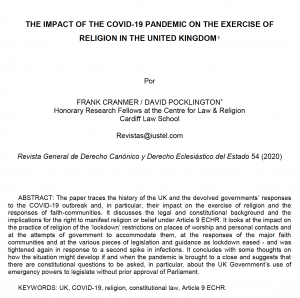