The right to worship and the right of public protest

The Committee points out that the right to protest safely has to be accommodated within the general defence of “reasonable excuse” so as not to traverse Article 11 ECHR (peaceful assembly) and the Human Rights Act 1998 and suggests that there has been a “confusing ambiguity” in the Regulations governing gatherings. It concludes at paragraph 83:

“[T]he exceptions to the prohibition on gathering under lockdown extend to ‘communal worship’, as long as the required precautions are taken. This includes indoor gatherings where the risk of covid-19 transmission is said to be higher. The Committee welcomes the respect this exception shows for the human right to freedom of religion under Article 9 ECHR. Article 9 expressly includes the right to manifest one’s religion or belief in community with others in the form of worship. However, the justification for treating gathering for religious purposes differently from gathering together for the purposes of protest is not clear” [emphasis added].

On Tuesday, the Scottish Parliament voted unanimously to pass the United Nations Convention on the Rights of the Child (Incorporation) (Scotland) Bill, which incorporates the Convention into Scots law. Article 14 of the Convention reads as follows:

“1. States Parties shall respect the right of the child to freedom of thought, conscience and religion.

2. States Parties shall respect the rights and duties of the parents and, when applicable, legal guardians, to provide direction to the child in the exercise of his or her right in a manner consistent with the evolving capacities of the child.

3. Freedom to manifest one’s religion or beliefs may be subject only to such limitations as are prescribed by law and are necessary to protect public safety, order, health or morals, or the fundamental rights and freedoms of others.”

In January, there were several media reports about Siham Hamud, a 12-year-old Muslim pupil at Uxbridge High School, being repeatedly sent home from school for breaching the school’s uniform policy by wearing an ankle-length skirt rather than the short skirt or trousers mandated by the school’s policy. As a result of being repeatedly sent home from school, she had accumulated three weeks’ unauthorised absences and the school had threatened to bring legal action against her parents. Khatija Hafesji, of Monckton Chambers, published a useful note on the case, here. On Tuesday, however, The Guardian reported that the school had sent the Hamud family a letter of apology and had confirmed that it would not be taking legal action for the time Siham was unable to attend school.

In which connexion, two German MEPs, Christine Anderson and Guido Reil, both of the far-Right Alternative für Deutschland, have tabled a Motion for a Resolution in the European Parliament calling on the Committee concerned “to draw up a report on how to encourage the Member States to prohibit children and young people in nurseries and schools, as well as employees in both public institutions and private companies, from wearing larger religious symbols”.  How far it will get is anyone’s guess.

In our post on 1 March 2021, Some recent developments in weddings law, we described the draft Registration of Marriages Regulations 2021, which amend the Marriage Act 1949 to provide for a new marriage registration system in England and Wales. This week, the General Register Office (GRO) issued further information in its Clergy Newsletters in Issue 10, February 2021 and Issue 11, March 2021, and in its Authorised Persons Newsletter, Edition 14, March 2021. These are summarized in our posts here and here.

Readers will recall that in mid-2019 the GRO was under pressure from the Government to bring these changes into effect as soon as possible and it was suggested that this should be by 2 December 2019. Given the time delay, the renewed urgency for implementing the new measures by 4 May is questionable.

The Independent Review of Administrative Law, chaired by Lord Faulks QC, has published its (remarkably low-key and temperate) report. The Lord Chancellor’s initial comments are here and, on Thursday, the Government announced a further public consultation which closes on 29 April.

For a preliminary comment, see David Allen Green on his Law and Policy Blog: Whoopsie: the government did not get the commission report on judicial review that it was hoping for.

A reminder from Charles Holland from the Regulators’ Code, published by DBEIS in 2014, of the difference between law and advice when drafting guidance, which stated:

5. Regulators should ensure clear information, guidance and advice is available to help those they regulate meet their responsibilities to comply

5.1 Regulators should provide advice and guidance that is focused on assisting those they regulate to understand and meet their responsibilities. When providing advice and guidance, legal requirements should be distinguished from suggested good practice and the impact of the advice or guidance should be considered so that it does not impose unnecessary burdens in itself. 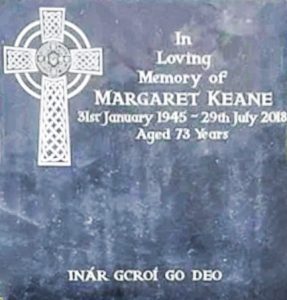 Both the UK and Irish media reported that on Wednesday, St Patrick’s Day, the headstone was erected on Margaret Keane’s grave after her family’s successful appeal to the Court of the Arches. Readers will recall that the Dean announced the decision of the Court shortly after proceedings were concluded: the written judgment is expected soon.

The Vatican and same-sex unions

“Blessings belong to the category of the sacramentals, whereby the Church “calls us to praise God, encourages us to implore his protection, and exhorts us to seek his mercy by our holiness of life”. In addition, they “have been established as a kind of imitation of the sacraments, blessings are signs above all of spiritual effects that are achieved through the Church’s intercession”.

Consequently, in order to conform with the nature of sacramentals, when a blessing is invoked on particular human relationships, in addition to the right intention of those who participate, it is necessary that what is blessed be objectively and positively ordered to receive and express grace, according to the designs of God inscribed in creation, and fully revealed by Christ the Lord. Therefore, only those realities which are in themselves ordered to serve those ends are congruent with the essence of the blessing imparted by the Church.

For this reason, it is not licit to impart a blessing on relationships, or partnerships, even stable, that involve sexual activity outside of marriage (ie, outside the indissoluble union of a man and a woman open in itself to the transmission of life), as is the case of the unions between persons of the same sex. The presence in such relationships of positive elements, which are in themselves to be valued and appreciated, cannot justify these relationships and render them legitimate objects of an ecclesial blessing since the positive elements exist within the context of a union not ordered to the Creator’s plan.”

Legal tweet/casenote of the year?

The Law Society Gazette reports that Lord Briggs JSC, speaking at a conference in Cyprus on civil procedure, said that rather than the full panoply of the current Civil Procedure Rules, the proposed online court for England and Wales might need one rule only, whether for civil, family or tribunal cases: “Do what it says in the electronic form.”

We can’t help wondering if there might be a need for a second rule: “Play nicely, children.”