Regular readers will be aware of Ms M Forstater v CGD Europe & Ors [2019] UKET 2200909/2019, which we noted here: a discrimination case in which Maya Forstater argued unsuccessfully that her belief that “sex” is a material reality which should not be conflated with “gender” or “gender identity” was a protected philosophical belief within the terms of s.10 Equality Act 2010. She appealed, and the Equality and Human Rights Commission intervened in the recent hearing by the EAT.

The EHRC has published a statement about its intervention, urging the EAT to view a gender-critical belief that sex is biological and cannot be changed as a protected philosophical belief.  The EHRC argues that, legally, there is a difference between holding a belief and how that belief is manifested and contends that the lower tribunal in Ms Forstater’s case wrongly conflated the question of whether or not the belief was protected with the way in which it was expressed. The full text of the EHRC’s submission is here.

The EAT’s determination has not yet been handed down. Watch this space.

Ofsted has published a research review on religious education. It concludes that “RE is vital in preparing pupils to engage in a diverse and complex multi-religious and multi-secular society”. However, it also notes what it describes as “significant challenges that limit high quality in RE”, two of which are “a lack of consideration about what it means to ‘be scholarly’ in objective, critical and pluralistic RE” and “a lack of clarity on what constitutes reliable knowledge about religion/non-religion, leading to teachers embedding unhelpful misconceptions”.

Madeleine Davies has a longer review piece in the Church Times, here (£).

Michael Cross reports in the Law Society Gazette that the Government is considering the creation of “a single comprehensive repository of England and Wales court judgments”, to be run by the National Archives. The plan is that it would publish almost every decision made by courts and tribunals. He notes:

“The prospect of statutory comprehensive judgments data was cautiously welcomed by technology experts and researchers. However, it will face opposition from senior judges, who are understood to be concerned about the loss of control over judgments. The move, which would require primary legislation along the lines of the 1958 Public Records Act, would also threaten the future of BAILII, which receives one quarter of its £200,000 annual budget from the Ministry of Justice.”

We very much hope that – whatever happens to the proposal – the future of BAILII will be secured, for two reasons. First, like every other legal website in the UK, we use BAILII’s neutral citations as standard and link to the judgments on BAILII whenever possible. But secondly and much more important, it’s the British and Irish Legal Information Institute, not just the English & Welsh one. A “single comprehensive repository of England and Wales court judgments” would no doubt be very useful but, for us at any rate, certainly not at the cost of losing easy access to judgments of the courts in Scotland and Ireland.

The Highgate Cemetery Bill [HL], the private bill on which we last posted in January 2020, continues its slow progress through Parliament. Having been carried over from the 2019-21 Session, it now awaits a date for its second reading in the Commons. Its purpose is “to confer powers upon the Friends of Highgate Cemetery Trust to operate, maintain and improve Highgate Cemetery and to extinguish rights of burial and disturb human remains in Highgate Cemetery for the purpose of increasing the space for interments and the improvement of Highgate Cemetery; and for connected purposes”.

Some (very light) reading for the weekend

According to Ray Hemingray, Re Mitcham Road Cemetery Croydon [2021] ECC Swk 2 probably qualifies as the shortest judgment ever circulated by the Ecclesiastical Law Association. Comprising just six paragraphs, the case concerns the successful petition for the temporary removal of cremated remains in order that a further interment of cremated remains could be made in the double depth grave, currently prevented by their positioning. At the time of their burial, the undertakers had known of the plans for a subsequent interment but had failed to make accommodation for that eventuality.

In Serbian Orthodox Church – Serbian Patriarchy v Kesar & Co [2021] EWHC 1205 (QB), handed down on Thursday, Foxton J allowed an appeal by the Church against a decision setting aside a Default Costs Certificate made by the court on 16 November 2020 in respect of Kesar & Co’s liability under a wasted costs order. The only reason for noting it here is that the substantive issue had been proceedings against the Church by various individuals, represented by Kesar & Co,  which related to various allegations of abuse by Serbian Orthodox clergy in Bosnia-Herzegovina, Croatia and Serbia between 1998 and 2014 – and on 17 January 2014, Master Cook ruled that the court had no jurisdiction to try those claims [3].

Which leads us to wonder on what basis Kesar & Co’s clients were advised that the Serbian Orthodox Church in the UK might be liable in the English courts for events involving foreign nationals that happened in former Yugoslavia. The sum total of our knowledge of private international law is zero, so we would be interested in any comments in elucidation. 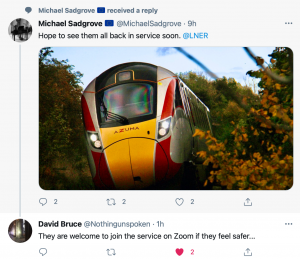 And in an Open Letter to Boris Johnson on 14 May 2021, the group #What About Weddings highlighted some of the inconsistencies in the present restrictions on weddings:

“Comparable areas of hospitality and live events have higher numbers and fewer restrictions than weddings. We are now in the situation where a group of people can attend a Zumba class inside together but not dance at a wedding, where a father can hug his child outside their venue but not walk together down the aisle and where a one night stand after a boozy night in the pub is fine but wedding guests are still told to wear masks during a ceremony with friends and family.”