COVID-19: easing the lockdown in England

In answer to three Written Questions from Andrew Rosindell (Con, Romford), Rachael Maskell (Lab, York Central) and Damian Hinds (Con, East Hampshire) about the impact of the COVID-19 restrictions on attendance at weddings, the Paymaster General, Penny Mordaunt, said this:

“The Events Research Programme aims to examine the risk of transmission of Covid-19 from attendance at events and explore ways to enable people to attend a range of events safely. To achieve this, the programme will explore how a combination of testing and non-pharmaceutical interventions (actions that people can take to mitigate the spread of coronavirus) can inform decisions on safely lifting restrictions at events from Step 4. The initial research pilots have already started and are taking place throughout May.

At Step 4, which will be no earlier than 21 June, the Government aims to remove all limits on weddings, civil partnership ceremonies and receptions, subject to the outcome of the Events Research Programme and the Social Distancing Review. Further guidance will be issued ahead of Step 4″ [emphasis added].

On 1 June 2021, il Bollettino posted Apostolic Constitution “Pascite gregem Dei” of the Holy Father Francis, reforming Book VI of the Code of Canon Law, which is significant in the fact that until now, never before had a book of the Church’s codified universal law been replaced in its entirety. The significance of these changes is described in an article in The Pillar, Book VI 2.0: ‘The restoration of justice’ and the Church’s new canon law, in Ed Peter’s blog A few thoughts on the revised Book VI of the Code, and elsewhere.

Ed Peters comments: “Francis’ apostolic constitution Pascite gregem has introduced numerous improvements to Book VI, more than I can assess or even list in a manageable blog post”. However, he identifies three issues that may soon surface:  did the textual reforms go far enough? did those reforms introduce new problems? and, will the reforms move many bishops to apply the Church’s penal discipline in cases wherein such procedures are warranted?  A small but significant improvement is the removal of “penal transfer to another office” as a punishment for a canonical crime. And a small but unfortunate error in the document issued was the spelling of the Pope’s name.

Religious beliefs and withdrawal of life-support

In Manchester University NHS Foundation Trust v Fixsler & Ors [2021] EWHC 1426 (Fam), the parents of Alta Fixsler, a two-year-old born with catastrophic brain injury who is on life support at the Royal Manchester Children’s Hospital Paediatric Intensive Care Unit, contested the Trust’s application to the Court to discontinue her treatment. The Fixslers are Chasidic Jews and Israeli citizens, and they sought to take Alta to Israel for continued treatment and the exploration of long-term ventilation at home in Israel in due course. If the court concluded that it was in her best interests for life-sustaining treatment to be withdrawn, they wanted that step to be taken in Israel. MacDonald J concluded that it would be in her best interests for life-sustaining medical treatment to be withdrawn and for the Trust to implement a palliative care regime. The Trust’s application was therefore granted.

The UK Human Rights Blog has a long note on the case by Rosalind English, here.

The Prime Minister and the appointment of bishops

Since his wedding in Westminster Cathedral, there has been considerable speculation about the Prime Minister’s role in appointing bishops of the Church of England, given the bar in s.18 Roman Catholic Relief Act 1829. The Sunday Times reported today that Downing Street has announced that, in future, the Lord Chancellor, Robert Buckland, will send the names of new Church of England bishops to the Queen.

Joshua Rozenberg tweeted: “You heard it first: Boris can no longer pick bishops, my blog last Sunday https://rozenberg.substack.com/p/boris-can-no-longer-pick-bishops….”. We note that since he became Prime Minister in July 2019, only one diocesan bishop has been appointed, the Rt Revd Guli Francis-Dehqani, Bishop of Chelmsford. The process for the nomination of suffragan bishops does not involve the CNC.

Furthermore, following a change in the rules governing the Crown Nominations Committee in 2019, he will have been given only one name by the CNC, with the other being held in reserve. Whilst the UK Prime Minister does not select or pick bishops, nor in practice have they done since 2007, the wording of s.18 of the 1829 Act is quite broad and could encompass a PM’s communications to Her Majesty – “any person professing the Roman Catholic religion directly or indirectly to advise [her] Majesty”. The House of Commons Library Standard Note Prime Ministerial involvement in ecclesiastical appointments(28 February 2008) comments “[t]his particular aspect of Prime Ministerial duties [i.e. advice on ecclesiastical preferment] could be delegated to another minister not similarly barred. Further delegation of these functions by the Lord Chancellor is addressed in the Lord Chancellor (Tenure of Office and Discharge of Ecclesiastical Functions) Act 1974.

On 16 May, we reported that the recently circulated judgment Re Mitcham Road Cemetery Croydon probably qualifies as the shortest judgment ever circulated by the Ecclesiastical Law Association. We have been informed by the ELA that the neutral citation for this case has been changed to [2021] ECC Swk 2. Our posts referring to this judgment have been changed accordingly.

A commentator on Twitter reported, “In these strange times, a regular member of Westminster Cathedral Choir, whose freelance work was deemed ‘unviable’ by the govt (position: retrain rather than receive financial support) was yesterday unavailable to sing for the PM’s wedding as he was busy, driving a delivery truck.”

Next, it will be a service of blessing in a cathedral for the asparagus,,, 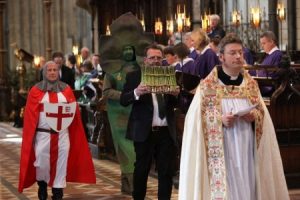