On Tuesday, Nicola Sturgeon announced that Scotland is to move to level zero of the COVID-19 restrictions on 19 July but that the mandatory use of face coverings is to remain in place for “some time” as a result of the spread of the Delta variant. The move to level zero means that more people will be allowed to meet indoors and to attend weddings and funerals, but limits on outdoor meetings will be maintained and the return of workers to offices is to be delayed. She added that she still hoped that Scotland could move beyond level zero from 9 August – the point at which the Scottish Government was aiming to end most legal restrictions.

On Wednesday, the Welsh Government announced that most COVID restrictions will be lifted from 7 August, with the ending of legal limits on the number of people who can meet others. Social-distancing laws indoors will be replaced with a requirement for workplaces to conduct risk assessments, but face masks will still be required in most indoor public places other than in hospitality businesses such as pubs and restaurants – and people will be expected to continue working from home wherever possible.

Step 4 guidance for England (and even legislation!)

The move to Step 4 in the relaxation of COVID-19 restrictions in England was announced on 5 July, and in “Step 4” and places of worship we noted that If matters proceeded as before, these statements to the House of Commons and press releases would be followed by departmental guidance (on places of worship, performing arts guidance, &c), with legislation just before (or even after) it becomes effective. This left faith bodies in the difficult position of being unable to publish meaningful guidance until these measures were in place. Many clergy and others took to social media asking why guidance is not yet available, unaware that this is how faith bodies are required to accommodate this Government’s delivery of its guidance and legislation.

Since Step 4 is an across-the-board relaxation, it is possible to work up “quick and dirty” provisional guidance on the major areas of interest (unless, of course, there is a hardening of the requirements as there was with “non-professional singers”, despite the scientific evidence). This was accomplished by the Methodist Church which on 13 July posted an update to its Coronavirus Guidance for Property. Acknowledging that there were no specific updates to government guidance on places of worship at the time of writing, it pointed out that the Health Secretary had informed the Commons that from 19 July, there would be “… no restrictions on communal worship and singing”, including singing at weddings, funerals and baptisms. When Government restrictions are removed, the emphasis will be on “personal responsibility”, and on the basis of current Government indications, the update lists thirteen bullet points on what will the lifting of restrictions will mean for churches and communal worship.

This was followed by sections including What does the Methodist Church advise?, What should we consider before reopening our church buildings?, How can we make our buildings as safe as possible?, and Further guidance for ministers and leaders of worship. Perhaps the most important is the advice that churches should monitor temporary local restrictions or additional advice that may be offered by health officials in areas of high infection rates, as in the recent advice by the Welsh Government Technical Advisory Group on communal singing and chanting, including blowing of wind instruments and pipe organs. It also discourages exchanging the Peace and suggests that ministers should refrain from using the common cup for Holy Communion – two eminently sensible precautions where infection rates are high.

A tranche of “coronavirus legislation” in England was revoked on 15 July through The Health Protection (Coronavirus, Restrictions) (Steps etc.) (England) (Revocation and Amendment) Regulations 2021, SI 2021/848. However, as we noted, this revokes only those regulations included in the Schedule, and importantly, does not include health and safety legislation.

Closing a loophole in C of E General Synod elections

Rule 50(2) of the Church of England’s Church Representation Rules (House of Laity: qualifications for election), requires that any lay person seeking to stand for election to the next General Synod must have received holy communion on at least three occasions in the twelve months to 12 July. In what the Church Times described as “a last-minute scramble”, the Rule was changed last Sunday to accommodate those who have been shielding during the pandemic or who attend churches where communion has been suspended or restricted. An amendment moved by Jamie Harrison (Durham), chair of the House of Laity, added the words: “and the person is to be treated as meeting the first condition for the purposes of these Rules if the person would have met it but for matters connected with coronavirus (within the meaning of the Coronavirus Act 2020)”.

Synod agreed the amendment by 273 to 11, with seven abstentions. The Church Representation Rules (Amendment) Resolution 2021 was laid before both Houses of Parliament on Wednesday 14 July and came into force on Thursday.

Still at Synod, the motion to take note of the Report on proposals for legislation to replace the Clergy Discipline Measure 2003 (GS 2219) was carried by 299 votes to four, with five abstentions. A substantive motion, as follows, was carried by 238 to 32 with 20 abstentions:

“That this Synod: Believing the proposal in GS 2219 to categorise complaints against clergy as either ‘complaints’ or ‘misconduct’ is likely to perpetuate existing trauma of clergy being subjected to serious formal process for some conduct which does not justify prohibition from ministry and the loss of home or livelihood.; and also believing that the proposed timetable for tabling new legislation will add yet further lengthy delay to remedying the manifest defects of the Clergy Discipline Measure 2003;

a) urge the proposed implementation group to develop a system of initial assessment that distinguishes between:

(i)  complaints not involving misconduct

(ii)  misconduct that is less than serious, and

b) encourage the business committee to enable the implementation group to present its initial proposals on a proposed approach to Synod in November 2021 so progress can be made with serious intent through the Synod sessions of 2022.”

Pope Francis and the Latin mass

On Friday, Pope Francis issued a motu proprio, Traditio Custodes, in which he declared, inter alia, that:

“It belongs to the diocesan bishop, as moderator, promoter, and guardian of the whole liturgical life of the particular Church entrusted to him, to regulate the liturgical celebrations of his diocese. Therefore, it is his exclusive competence to authorize the use of the 1962 Roman Missal in his diocese, according to the guidelines of the Apostolic See.”

The motu proprio sets out the responsibilities of bishops whose dioceses already have one or more groups that offer Mass with traditional liturgy and instructs them to determine that those groups do not deny the validity of Vatican II and the magisterium. It asks the local bishops to verify that the already-established parishes “are effective for their spiritual growth and to determine whether or not to retain them”. Bishops are also instructed not to authorise the establishment of new groups or the erection of new personal parishes.

In Fedotova and Others v Russia [2021] ECHR 636, three same-sex couples gave notice of intended marriage to their local departments of the Register Office­ which were rejected on the grounds that Article 1 of the Russian Family Code defines marriage as a ‘voluntary marital union between a man and a woman’ [5 & 6]. One of the reasons for dismissing the subsequent complaints to the domestic courts was that the Constitutional Court had previously held that the Constitution did not bestow the right to marry on same-sex couples, and the concept of same-sex marriage ran counter to national or religious traditions and the understanding of a marriage ‘as a biological union between a man and a woman’ [15].

Before the ECtHR, the Russian Federation argued that the applicants’ complaints were manifestly ill-founded. The domestic courts had ruled against the applicants to protect ‘interests of a traditional family unit’, which was subject to the special protection by the State; further, marriage was a ‘historically determined union between a person of male and a person of female sex, which regulates the relationship between the two sexes and determines a status of a child in society’ [32].

The ECtHR was totally unimpressed: following the principles set out in Oliari and Others v Italy [2015] ECHR 716 and Orlandi and Others v Italy [2017] ECHR 1153, it held unanimously that there had been a violation of Article 8 of the Convention. Subsequently, the first deputy chairman of the State Duma Committee for State-Building and Legislation told Interfax that Russia would not comply with the judgment.

Hijabs at the CJEU

On Thursday, the CJEU ruled in two conjoined cases, WABE and MH Müller Handel [2021] EUECJ C-804/18 and C-341/19, on bans on wearing the hijab or other religious symbols in the workplace. We noted the judgment here. It has already sparked adverse reactions. Polly Toynbee, writing in The Guardian – The European ruling on headscarves opens the way to rank discrimination – as a vice president of HumanistsUK, points out that though she may not understand the reasons why, “visible symbols of belief and religious identity plainly matter greatly to many” and defends the right to wear them on the Voltaire principle that “While I wholly disapprove of what you say, I will defend to the death your right to say it”. Scottish Legal News quotes Maryam H’madoun, a Belgian campaigner against headscarf bans and a justice policy officer for the Open Society Foundation, as saying that she fears that the ruling could lead to discrimination amid rising hostility to Muslims across Europe.

So far as the UK is concerned, our untutored, inexpert view is that now we have finally left the EU and the transition period is over, judgments of the CJEU have only persuasive authority at most – but we’d be interested in the views of any specialists in EU law who read this.

The last word on the wearing of face masks comes from Caroline Lucas MP (Green Party), who tweeted that “In the bizarre world of Westminster Covid measures:

– peers are “expected” to wear masks

– staff are “required” to wear masks

– MPs are “encouraged” to wear them. 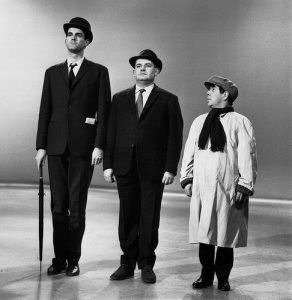