Review of ecclesiastical court judgments during October 2021 (3 of 3)

Twenty four consistory court judgments were circulated in October, and the ten 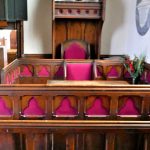 featured in the first part of the round-up all relate to Reordering, extensions and other building works. The second part reviewed judgments which concern Exhumation and Churchyards and burials and this third part considers Organs, CDM Decisions and Safeguarding, and CFCE Determinations, Other reports, Visitations &c, as well as links to other posts relating to ecclesiastical law. 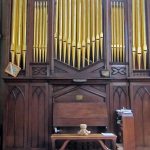 The Petitioners sought permission for the removal and sale of a “magnificent Henry Willis pipe organ” that had been installed in the church since the building was constructed over 120 years ago, v infra. They wished like to sell the organ, which is in a deteriorating condition of repair and has not been played since 1985, to an interested buyer – the Bethany Presbyterian Church, Rochester, New York State, who would restore it, without modification from its original design, and use it for performances and worship. The funds raised by the sale would secure the future of St Dunstan’s for many years [1]. The Chancellor, the Worshipful Graham Wood QC, explained:

“[2]. The responsibility of this court exercising the faculty jurisdiction…is to ensure that the PCC is not profiteering by removing a heritage asset which is of substantial interest not only from an historic, aesthetic or architectural point of view, but also as a splendid example of a rare musical instrument which is deserving of preservation and enhancement, if at all possible, in the location in which it was intended to remain for as long as the building was standing.”

The petition was not formally opposed by parties opponent; however, as a result of consultation and statutory notification to various heritage bodies, a number of issues were raised: the British Institute of Organ Studies (BIOS) raised objections to the removal, contending that it would be far more efficacious and sensible to keep it in situ and to raise funds for its restoration; Historic England (HE) did not support the proposal, and identified a number of potential sources of grant aid funding for repair [3]. The Churches Buildings Council (CBC) did not object and provided some observations which are referred to in [4].

The Chancellor explained that the organ had not been installed immediately after the construction of the church building, but several years later, and was fitted into the space intended for an organ. However, this was not purpose-built as such, and “it is said that the fit is far from perfect, although there is no doubt that this magnificent instrument is a prominent focal point within the church”. The pipework and mechanism is standard Willis design, and the lower casing is constructed from Honduran mahogany [6].

The Chancellor noted that the correct test to be applied whenever a change is planned to the interior of a listed church building, including alterations to the fixed or movable furnishings, was the approach of the Arches Court in Re St. Alkmund, Duffield [2013] Fam 158 . He had no difficulty in coming to the conclusion that the removal of this organ would result in harm to the significance of the building in terms of its historical and architectural interest [25; the  harm would be:

“[25]. … more than modest and relatively serious in the sense that it amounts to a substantial alteration in terms of the visual aspect and the tradition which has been associated with this church building. While the value of this heritage asset is intrinsic in the sense that it lies within the instrument itself, it is relevant in assessing the seriousness that what is being proposed in terms of alteration is actually the preservation and restoration of the organ rather than its removal and disposal. In a sense it is the opening up of the space left behind which creates the harm, because one of the purposes of this application is to ensure that the Henry Willis organ is not lost to future generations, even if they may not be within the United Kingdom”.

[27]. Applying the fourth and the fifth of the Duffield questions…equally I have no difficulty in concluding that the benefit of the “alteration” and the removal of the organ from St Dunstan’s to allow it to be installed in a church overseas is substantial, and far outweighs the harm created by the fact that this will now be a church without a pipe organ…”

[29]. …This fine church building cannot be maintained without funds, and the present PCC and congregation is close to impecunious. The injection of a substantial sum of money* for ongoing maintenance and improvement of the fabric represents a very great benefit indeed. Although the nature of the works to the organ loft for the present is unclear, and will have to be the subject of a separate application, they are relatively modest and unlikely to involve substantial expenditure.”

The Chancellor granted a faculty, subject to conditions [30], [32]; these included a requirement that the petitioners undertake to petition for a faculty in relation to refurbishment works of the organ space, once the organ is removed, and in any event within 12 months of the date of this faculty grant. The return of the Choir Organ’s Corno di Bassetto currently on temporary loan to St Anne’s Aigburth, is subject to the conditions of an earlier faculty in 2008. [Re St. Dunstan Edge Hill [2021] ECC Liv 2] [Top of section] [Top of post]

There were no Privy Council meetings in September 2021.