The Charities Bill (Northern Ireland) passed its final stage on 8 February. In summary, it largely overrides the judgment of the Court of Appeal in McKee & Hughes v The Charity Commission for Northern Ireland [2020] NICA 13, in which the Court held that the Commission’s staff did not have any decision-making powers when acting alone, and restores what was thought to be the position prior to that judgment. It will:

Neil Barcoe told the Committee [Q 149] that the Law Commission was proposing to make it easier for religious-only weddings to come within the ambit of what is recognised by the state by removing the buildings element of the current law, so as long as the celebrant is authorised and it is a legal marriage. That would capture more religious-only weddings, which may currently take place in a restaurant or somebody’s parents’ home, which is not recognised. The Commission was also looking at bringing more of these weddings within the ambit by amending the law so that if one party to a wedding believes that the celebrant is authorised it would be considered a void marriage rather than as, at present, a non-marriage – which would give them full access to the financial remedies that are available on divorce.

“We were urged to consider going further and we were asked to consider providing that any religiously recognised wedding would at the very least result in a void marriage rather than a non-qualifying one. In our consultation paper, we have not provisionally proposed adopting that approach because all of the difficulties that have been raised with us in relation to religious-only weddings can also arise where people have had some ceremony other than a religious one, but a ceremony that is not legally recognised—for example, a couple who have a humanist wedding ceremony and do not also have a civil ceremony, or a couple who have a ceremony conducted by an independent celebrant who does not represent a religious or non-religious organisation but provides a ceremony for them—or indeed they can arise in relation to a couple who cohabit without having any type of ceremony at all.

Our view is that there comes a point where it is wrong to focus on the ceremony. We cannot solve all these problems by looking at the ceremony; we have to look at the relationship. There comes a point where the answer is not to impose a status on the ceremony, but where the answer is to have cohabitation reform that would ensure that all of those parties—whether they have cohabited, had a religious wedding or had some other non-legally recognised wedding—are protected.”

The Faculty Jurisdiction (Amendment) Rules 2022 were passed by General Synod by a show of hands on the afternoon of Wednesday 9 February 2022. These rules will now go before both Houses of Parliament for approval and, if approved, will come into force on 1 July 2022.

The amendment proposing that works to introduce wireless satellite broadband receiving equipment be added to List B was carried without a vote. However, the amendment to move the replacements of boilers to List B was too close to call by show of hands and was lost by a narrow margin: 142 in favour, 145 against, with 12 abstentions. As a consequence, the installation of like-for-like fossil fuel boilers and new oil tanks will now be subject to a full faculty application.

Summaries of our reviews on the consistory court judgments in which heating was a major consideration from 2017 to the present time are here. The most recent judgment to be added is Re All Saints Woodham [2022] ECC Gui 1 which balances the thermal and aesthetic replacement flooring to be used in conjunction with underfloor heating. A detailed description of the proposed flooring is given by the Senior Project Consultant to the Petitioners.

The Safeguarding (Code of Practice) Measure 2021 (Commencement and Transitional Provision) Order 2022, SI 2022/118 appoints as 1 March 2022 the day on which sections 1 and 2 of the Safeguarding (Code of Practice) Measure 2021 come into force. This Order also makes transitional provision to keep in operation any guidance made by the House of Bishops on matters relating to safeguarding children and vulnerable adults until that guidance is replaced by a code of practice under the new section 5A of the Safeguarding and Clergy Discipline Measure 2016. A failure to have due regard to any such guidance which continues in operation continues to be misconduct for the purposes of the Clergy Discipline Measure 2003. [With thanks to Benjamin Lewis for highlighting this SI.]

On Wednesday we posted CDM Tribunal considers “liking” tweets, which reviewed a recent case considered by the Bishop’s Disciplinary Tribunal for the Diocese of Southwark that addressed the issues resulting from a priest’s use of the “Like” function on his Twitter account. The Tribunal stated: “[t]he consequence of the Respondent liking these images was that those who followed him would be exposed to those images without any action being required on their part” [14]. This statement raised the question of how Twitter operates, and in particular, the operation of the “Like” function.

At the risk of being accused of vulgar self-advertisement, Frank and Russell Sandberg have a chapter, ‘Regulating Religious Diversification: A Legal Perspective’, in a new book edited by Beth Singler and Eileen Barker, Radical Transformations in Minority Religions (Routledge, 2022), which was published on Thursday.

We explore how English and Scots law deal with New Religious Movements and religious schisms within them and within more traditional religions. We argue that, though the law in both jurisdictions is supposed to protect the right to manifest religion or belief in any form, in reality, the courts are at times reluctant to recognise new forms of religiosity or doctrinal developments. In particular, though legal provisions are protected as individual rights, the courts readily assume a direct link between credal belief and behaviour and fail to protect those who profess membership of a religion but adhere to a personalised interpretation of that religion, and so feel themselves to be bound to manifestations that are not common within that religion as a whole. 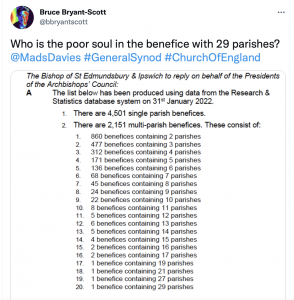