In addition to developments relating to “contested heritage”* within the Church of England, there have been a number of consistory court judgments in which this has received judicial consideration. On this blog, we have had guest posts by Trevor Cooper and Simon Hunter which reviewed the Church’s guidance on “contested heritage” and explored “the inherent contests of heritage, and on Rustat” respectively.

The judgment in Re Dorchester St Peter, Holy Trinity and All Saints [2022] ECC Sal 4 was the culmination of initiatives within the parish concerning a monument to John Gordon in St Peter’s church, [9] to [17]. Arlow Ch clarified at [9] that:

“Many will assume that this petition is a response to the Black Lives Matter movement which gave rise to global anti-racism protests after the murder of George Floyd…it is clear from the evidence before me that this church community has been considering and working towards some resolution of these issues for much longer.”

In July 2021, the Vicar and Churchwardens petitioned for a faculty to move the memorial to 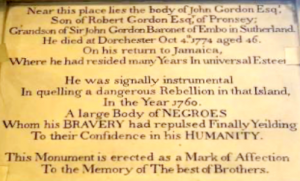 John Gordon from a prominent position inside the church to the County Museum immediately next door and erect a replacement memorial in the church [12]. John Gordon was a plantation overseer (and later owner) in Jamaica who, it said on his monument, repulsed a rebellion of “a large body of negroes” in Jamaica in 1760 [5]. The petitioners argued that, in the current social climate, the wording of the original memorial might offend some visitors to the church and that its continued presence would be harmful to the church’s mission and message.

Although the memorial had been on the north wall of the church for almost 250 years, its ownership did not rest with the church; however, the consent of its owner was not a necessary prerequisite to the grant of a faculty, s 66(1) Ecclesiastical Jurisdiction and Care of Churches Measure 2018, where they could not be found “after reasonable efforts to find him or her have been made”. The Court noted “it has been established that there is no direct descendant of John Gordon, but, despite substantial efforts, it has proved impossible to identify a current heir at law. By now the class of relevant descendants is likely to be enormous” [7].

Important in the consideration of the petition was the necessary process of consultation and advice. This drew support from some, but objections from others [18] to [26]; extracts from these are summarized here. Arlow Ch outlined the applicable law [27] to [30], the special architectural and historic interest of the church building [31] to [33], the special significance of the memorial [34] to [35], and the historical context – John Gordon and Tacky’s Revolt [36] to [40].

In applying the Duffield guidelines, Arlow Ch considered whether the proposals would result in harm to the special significance of the building, and how serious would that harm be [41] to [44]. Agreeing with the CBC’s assessment of “moderate harm”, she said:

“[44]. The harm to the significance of the memorial itself would be greater (than to the building). I am very mindful of the fact that that significance comes principally from its value as a rare, possibly unique, record in stone of a significant event in history. In some respects, its presence in the church of St Peter is an accident of history, in that it is only there because John Gordon happened to die in Dorchester on his way passing through the town, but it has nevertheless been in the building in this location for almost 250 years and records the burial of John Gordon’s remains nearby. Although the memorial will remain intact and well curated, its removal from the physical context in which it has remained since its erection would be harmful to its significance. That significance will also be harmed by its likely removal from permanent public display (whilst remaining publicly accessible)”.

Arlow Ch concluded that the public benefit to be derived from the removal of the memorial, subject to its replacement with a memorial omitting details which might cause offence, would outweigh the harm caused. The obvious recent comparison is with the judgment in Re The Rustat Memorial, Jesus College Cambridge, [2022] ECC Ely 2; however, Arlow Ch regarded the memorial as “quite different” from the memorial to Tobias Rustat:

“… On its face, [the Gordon memorial] celebrates in language of acclamation the violent quelling of a rebellion by enslaved people against a status which is now universally acknowledged as morally repugnant and contrary to Christian doctrine. That status was imposed upon them largely because of their race. Its continued presence in the building implies the continued support, or at least toleration and acceptance, of discrimination and oppression. Such a position could be said to be uncomfortable in any public building, but presents a particularly striking discord with the purpose of this building as a house of God. It is entirely inconsistent with the message of the universality of God’s love which this church community seeks to share. The fourth Mark of Mission of the Anglican Communion is of particular relevance: To transform unjust structures of society, to challenge violence of every kind and pursue peace and reconciliation” [47].

Furthermore, Gordon’s involvement in the slave trade had been much more direct and substantial than Rustat’s: at the time of his death, Gordon had personally owned more than 400 slaves [51]. Arlow Ch concluded that “even with careful and sensitive contextualization of its history”, the tone and content of the memorial were so at odds with the Mission Action Plan for the church that leaving it in situ “would not adequately address the needs of the petitioners to proclaim afresh the Gospel in this generation” [65]. She concluded that the public benefit from the proposals would outweigh the harm caused by them [69] and granted a faculty subject to several conditions intended to ensure that any harm to the significance of the memorial and of the church would be minimised [70].

“We are aware of one other case involving a monument which has given cause for concern where [judgment] is still pending at the time of writing. We make no comment on that save to say that its outcome is unlikely, given the facts known to us, to change our view of what needs to be done as a matter of urgency in the aftermath of the Rustat case”.

It was clear at the time that this referred to the John Gordon memorial at St Peter, Holy Trinity and All Saints in Dorchester. However, whilst the St Peter judgment makes frequent reference to Rustat§, and for which links to the slave trade were a significant issue, the courts took other factors into consideration in their respective determinations relating to the retention or removal of the monuments: the link between the person and the church/college chapel, their role as a benefactor, the significance of the potential removal in relation to the memorial itself and on the building, the language used on the memorial.

A further case, Re St Mary Barnes [2021] ECC Swk 10, considered a monument commemorating the Hoare family of Barn Elms and their links with the slave trade. This was not cited by either court but provides an example at the opposite end of the spectrum of involvement with slavery. In that case, Petchey Ch considered that none of the family members to be commemorated had links to the slave trade – only a member of the family two generations earlier than the oldest of them.

In view of the recent initiatives concerning links between memorials and the slave trade in Bristol, the London Borough of Lambeth and elsewhere, it seems likely that other examples will be found in which the consistory courts will be tasked with determining the future of other statues and monuments. Whilst to date there has been no involvement of the Arches Court, the judgments in Re St Mary Barnes, Re The Rustat Memorial, Jesus College Cambridge, and Re Dorchester St Peter, Holy Trinity and All Saints address a wide spectrum of circumstances which might guide future determinations.

* “The term contested heritage is a somewhat euphemistic expression applied to memorials and other structures associated with individuals from the past whose conduct is considered abhorrent and inimical to contemporary values and, of particular relevance in faculty cases, to Christian theology and standards of behaviour. Most commonly, the issue arises from property memorialising slave traders or erected on the profits of slave trading.”