For us, as for our readers, the week has been totally overshadowed by the death of Her Majesty Queen Elizabeth II. We join with faith and secular bodies worldwide in expressing thanks for her life of service and witness. May she rest in peace.

The Cabinet Office published Guidance for the public and businesses on the period of National Mourning and the Department for Levelling Up, Housing and Communities has issued National Mourning period: guidance for faith and belief groups and places of worship. Various denominations published prayers and liturgical resources to commemorate Her Majesty:

Oath of allegiance on the demise of the Crown

We have been asked why MPs and Peers are swearing oaths to the new Monarch and this is covered in a separate post, here. There are a number of issues such as this and, to date, we have reproduced Press Releases from the Church of England and from the UK Government which are relevant to “law and religion”. Links to these and future posts in this area will be included in the new heading “Church and State” in the Index. In view of recent concerns regarding the clergy Oath of Allegiance, our initial thoughts are that whilst Canon C 13 will need to be updated, there is no necessity for the Oath of Allegiance itself to be re-sworn.

The Bill of Rights Bill

There have been widespread media reports that the Government has shelved the Bill of Rights Bill, at least for the moment. It had been due for its second reading debate on 12 September; however, a “Government source” has been quoted as saying that the Bill is unlikely to progress in its current form and that the new administration is “reviewing the most effective means to deliver the objectives of the Bill as a whole”. Which is not to say that it might not reappear in a different form.

In a press release on 9 August (which we missed), the Ministry of Justice announced that it plans to bring the Marriage and Civil Partnership (Minimum Age) Act 2022 into effect on Monday 27 February 2023.

The Society’s lecture due to take place on 14 September has been postponed.

The Yorkshire Post reports that Leeds City Council is to impose a strict code of conduct on street preachers after increasing reports of homophobic preaching. According to the report, the code states that preachers must:

“Refrain from using homophobic language or any other hate speech. It is an offence under the Public Order Act 1986 to use threatening, abusive or insulting words with the intention of causing a person to feel harassment, alarm or distress.”

It also reports that the Council and West Yorkshire Police have reminded street preachers that their right to freedom of expression under Article 10 ECHR is a qualified one in respect of “the prevention of disorder or crime”. [With thanks to the Religion Media Centre.]

The recently circulated judgment, Re St John the Evangelist Weymouth [2022] ECC Sal 3, is notable on two (possibly unrelated) points: the importance of distinguishing Grade II from Grade II* listed buildings, and the need for “differences of opinion to be held and explained with a courtesy and respect” [30]. On the first, the distinction between Grade II and Grade II* listed buildings is taken for granted by ecclesiastical lawyers, but this apparent subtle distinction is of significant importance “as reflected in the differing consultation requirements for works to Grade II listed buildings and Grade I and II* buildings in the Faculty Jurisdiction Rules 2015”[7].

In this case, although the papers submitted in support of this petition “repeatedly referred to the building as being Grade II listed” it is in fact Grade II*; and furthermore, the Petitioners relied “particularly heavily upon the decision in Re All Saints, West Burnley [2017] ECC Bla 6 as an example of the introduction of fully upholstered chairs, to replace wooden pews, and repeatedly refer to this” [19]. However, West Burnley church is Grade II listed.

On the second point, in an addendum to her judgment, Arlow Ch commented:

“[31]. …the tone of the Petitioners’ representations has been inappropriately defensive and at times bordering on threatening. I have not found the unnecessarily hostile tenor of those submissions helpful. I take this opportunity to remind the Petitioners that the Diocesan Advisory Committee and the statutory consultees are a source of significant expertise freely available to them in the discharge of the heavy burden of using and maintaining a highly listed building such as this one…”.”

[32]. The faculty system does not exist as an obstacle to frustrate parishes, but rather as a means to ensure that careful and appropriate care is taken in the use and maintenance of the substantial part of the nation’s built heritage which has, by history, been entrusted to the Church of England.”

In Re Holy Cross Moreton Morrell [2022] ECC Cov 5, the Priest-in-Charge petitioned on behalf of the PCC for retrospective permission to allow a bench inside the churchyard to retain the ‘rainbow’ colouring to which it was repainted from dark brown without permission. It had been suggested to the PCC that the bench should be painted in rainbow colours 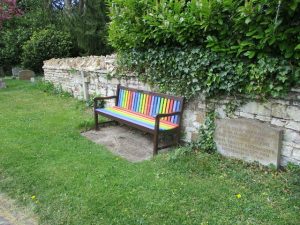 because of the association between the rainbow and the NHS that arose during lockdown. No decision or vote was held to support the suggestion; however, at a churchyard working party meeting, a churchwarden purported to give permission for the bench to be painted. [Photo © Jonathan Thacker (cc-by-sa/2.0)].

Samuel Ch noted that “the churchyard is used by many different people, not all of whom would agree with the sentiment that led to such a brightly-coloured item, with a political element, being given a place of prominence there” [ 7]. He was not persuaded by the arguments for retention of the rainbow colours and refused to grant a faculty, ordering that the bench should be repainted or restained as soon as possible:

“I have to consider the legal situation regarding this bench and also the thoughts, feelings and emotions of all users of the churchyard, not just those who support the significant change that was carried out without permission” [12].

The Sovereign Order of Malta?

On Monday, the Catholic Herald reported on the news that the Pope had issued a new constitution for the Order of Malta, asking if the Vatican might properly interfere with “the internal governance of another sovereign entity whose legitimacy stems from a mutual agreement under international law”?

On the same day, Ed Condon, writing in The Pillar, asked Is the Order of Malta still ‘sovereign’? and reminded his readers that the Order is considered a sovereign entity under international law, issuing its own passports and stamps, maintaining full diplomatic relations with nation states and with the same status as the Holy See at the United Nations. But:

“Whether viewed as an effort to reform a religious order, or to impose a new governing constitution on a sovereign entity, Francis’ actions on Saturday were as dramatic as they were definitive. The extent to which all the knights now accept them, both in private and in public, will likely demonstrate how Catholic the order is, and determine how sovereign it will remain.”