Review of the ecclesiastical court judgments during November 2022 (I)

Seventeen consistory court judgments were circulated in November, and the eight featured in this first part of the round-up all relate to Reordering, extensions and other building works. The second part will review the remaining nine  judgments which concern Flags, Organs, Exhumation and Churchyards and burials. Also CDM Decisions and Safeguarding, Privy Council Business, and CFCE Determinations, as well as links to other posts relating to ecclesiastical law..

Reordering, extensions and other building works 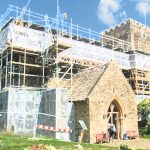 presented two faculty petitions, whereby they wished to carry out an extensive programme of repairs and reordering of the church interior, build an extension to the church on the north side, and carry out other works in the churchyard. Significant repairs are needed because the church sits in a flood plain with a high water table. This has caused significant damage to the floors, walls, pews and monuments, and in 2020 Historic England placed the church on its Heritage at Risk Register [4]. The plans for an extension have been in development for a long time, and a previous petition for a faculty for a two storey extension had been dismissed by Chancellor Blackett-Ord Ch. in 2012 [5, 6].

For funding reasons, the parish has split its proposals into two phases; the intention being that the first phase can be completed and stand-alone whether or not funding for the second is available. The first phases – “the Church Project” – compromises the repair and reordering of the existing church building, and is set out in Schedule 1 to the judgment. The second phases – “the Annexe Project” – compromises the proposed new extension and is set out in Schedule 2.

The three elements of the proposed works which the Deputy Chancellor considered to be likely to have the most significant effect on these matters are: the new extension (Phase 2), [15] to [24];  the proposal to raise the floor of the Nave and Aisles (Phase 1), [25] to [36]; and the proposal to remove 18 pews and to make the remaining pews moveable (Phase 1), [37] to [46]. The Deputy Chancellor was satisfied that the benefits of the proposals outweighed any limited harm that they might cause and granted a faculty for each phase of the proposed works, subject to conditions. [Re All Saints Cossington [2022] ECC Lei 3] [Top of section] [Top of post]

Re St. Peter Sibton [2022] ECC The amended petition sought permission for the installation of four stained glass panels in the three south chancel window openings, currently glazed in a clear geometric pattern in poor condition; and to convert all but four pews to form “pewlets” (shortened pews), the pews and all pewlets to remain in a moveable format [1]. The first part of the petition was uncontentious; the second was criticized, in part, by the Victorian Society although it elected not to become a party opponent [2]. Gau Ch. indicated his concern that the pews had been stored “on end behind the organ”, a method of storage which had already caused damage to some of the pews [3].

The petitioners analyzed their own petition on the basis of the Duffield criteria [5], although the Chancellor noted that it was doubtful that they would be considered entirely independent in doing so. The Victorian Society also made “very thoughtful and clear representations” [6]. In undertaking the balancing exercise, Chancellor Gau took into account that St Peter’s is the only building in Sibton available for public use, and that the greater flexibility created by shortening the majority of the pews and making all the pews mobile would make it a much more useful space for missional opportunities and pastoral well-being and for making the church a more viable space for the public to use.

He was therefore “just persuaded, due in large part to the helpful analysis by the petitioners of the situation, therefore to grant this petition in amended form” [7]. [Re St. Peter Sibton [2022] ECC SEI 3] [Top of section] [Top of post]

Re All Saints Mixbury [2022] ECC Oxf 6 In 2020 the Chancellor granted a faculty to authorize the temporary removal and storage of the iron railing around the church in order to facilitate installation of new drainage [2] – photos of railings attached to judgment.

The Rector and Churchwarden now sought a faculty to make the removal of the railings permanent. The church buildings officer agreed with anecdotal opinion that the church looked better without the railings. The Chancellor granted a faculty. The petitioners had made a good case for the railings not being reinstated; the absence of the railings would keep down the costs of maintenance of the church; and the benefits of not reinstating the railing would outweigh any minor harm to the church.

However, the court agreed with DAC officers that it would be regrettable if this church were permanently to lose a fine heritage asset, and the railings should therefore be adapted (as necessary) and reinstated elsewhere in the churchyard, where they can serve some useful function [17]. A condition was therefore imposed:

“The railings are to be retained and reused within the churchyard as agreed by a subcommittee of the DAC in due c  separate application for faculty permission (for which planning permission may also be required) is to be made, within 18 months of the grant of the faculty (or such further period as the court may allow on application by letter to the Registry)”.

Re St. Michael & All Angels Dalston [2022] ECC Car 4 The Petitioners wished to construct a new single storey extension to the north of the church, to provide a multi-function room for church and community use, a library facility and an office, and also convert the vestry extension to provide access to the community centre and an accessible toilet and kitchen. There were numerous objections, but no parties opponent. The Chancellor granted a faculty, being satisfied that the petitioners had made a good case for the proposals and that no serious harm would be caused to the church as a building of special architectural or historic interest. [Re St. Michael & All Angels Dalston [2022] ECC Car 4] [Top of section] [Top of post]

Re St. Mary Leake [2022] ECC Yor 1 Several items of repair and reordering were proposed. Letters were received from two people objecting to: replacement of the chancel pews with chairs; removal of two pews from each side of the west end of the church, in order to provide more circulation space; and the introduction of notice boards and leaflet stands at the west end of the church. The Chancellor was satisfied that the petitioners had made a good case for the proposals and he accordingly granted a faculty. [Re St. Mary Leake [2022] ECC Yor 1] [Top of section] [Top of post]

Removal and replacement of pews

Re St. Peter Conisbrough [2022] ECC She 4 The incumbent and churchwardens of the Grade I listed church sought permission to remove pews from the South Aisle of the nave and to install carpet tiles to cover the floor in the area where the pews would be removed from [1]. The pews are generally in poor condition and afflicted by woodworm; the Petitioners asserted that The Petitioners explain that the pews were uncomfortable and not useable on account of their poor condition. The pews are of mixed styles making for an unattractive and confusing aesthetic [3].

The north aisle and the back of church already have blue carpet tiles installed and the Petitioners wish to install matching tiles in the floorspace left by the pews they seek permission to remove. The floor is generally in a sufficiently poor condition as to need additional covering to make its use comfortable and safe. The Petitioners’ plan includes the retention of 20th century “Mouseman pews” [i.e. Robert Thompson of Kilburn, N Yorks] in the central aisle, which were perceived to be comfortable and were admired by the congregation [3].

Historic England considered the proposed removal of pews to be an acceptable level of intervention within the interior of a Grade 1 listed church causing limited harm; the Victorian Society took the view that carpet was inappropriate in the Grade I church [5]. The petitioners argued that the floor was generally in a sufficiently poor condition as to need additional covering to make its use comfortable and safe [6].

Singleton Ch. granted a faculty, as there were already blue carpet tiles in the church and “the floor exposed by the pew removal would be unusable, unattractive and potentially harmful in its present condition for its intended purpose as a suitable location for children to crawl and play”. However, she strongly encouraged the Petitioners to work with the DAC and the amenity bodies and to devise a scheme to repair/renovate the whole of the flooring in the nave of the church whether as a discrete plan or part of a greater proposal [6]. [Re St. Peter Conisbrough [2022] ECC She 4] [Top of section] [Top of post]

Re St. Saviour Croydon [2022] ECC Swk 5 The churchwardens applied for an interim faculty for the replacement of the existing gas boiler of the Grade II Victorian church with a new one. The petitioners had considered an electric boiler, but had been advised that the running costs would currently be four times the cost of running a gas boiler. Then Church of England had set a target to achieve carbon neutrality by 2030. The Faculty Jurisdiction (Amendment) Rules 2022 now require petitioners to demonstrate that they have had due regard to the guidelines of the Church Buildings Council on Net Zero Carbon, and the Diocesan Advisory Committee must advise whether consideration of the guidelines has been adequate.

In the present case the Chancellor was satisfied that the Petitioners had carefully considered all the available options and that there was no alternative at reasonable cost to replacing the gas boiler with another gas boiler. Also, the urgency of the situation (a non-functioning boiler as winter approached) was a strong justification for granting a faculty. [Re St. Saviour Croydon [2022] ECC Swk 5] [Post] [Top of section] [Top of post]