A pre-Christmas roundup for those who aren’t dashing around doing last-minute shopping… And a Happy Christmas!

The Crown Prosecution Service and the Bible

A street preacher, John Dunn, was arrested for hate speech after telling a gay couple holding hands that “the Bible says that homosexuals will not inherit the kingdom of God.” It appears that the Crown Prosecution Service commented that the Bible contains references “which are simply no longer appropriate in modern society and which would be deemed offensive if stated in public”.

Baroness Hoey subsequently raised the matter in the House of Lords, and the Advocate General for Scotland, Lord Stewart of Dirleton, replied as follows:

“The Wessex Area of the Crown Prosecution Service (CPS) has undertaken a post-case review and acknowledges that the statement was inappropriate. The statement was not intended to and does not represent a change to published CPS Policy. It is not indicative of a general approach by the CPS to cases involving the right to freedom of thought, conscience and religion, and the right to freedom of expression. As a result of the post-case review, in future, where skeleton arguments are ordered, in cases where there is scope for argument to arise as to rights such as that of freedom of expression, such arguments will be submitted to the Senior District Crown Prosecutor for signing off, prior to service.”

[With thanks to the Religion Media Centre.]

Police in Birmingham have charged Isabel Vaughan-Spruce with four counts of failing to comply with a Public Space Protection Order, in violation of a “buffer zone” around the British Pregnancy Advisory Service’s Robert Clinic in Kings Norton. She is due to appear at Birmingham Magistrates Court on 2 February.

The Protect Duty: an update

The Home Office has released further information about the likely content of the Protect Duty. Premises will be drawn into the scope of the Duty if they meet the following three tests:

There will be a standard tier and an enhanced tier that will be subject to additional requirements on high-capacity locations. As for places of worship:

“Government intended for places of worship to receive bespoke treatment under the duty, in reflection of the existing range of mitigation activities delivered and funded by Government to reduce their vulnerability to terrorism and hate crime. All places of worship will be placed within the standard tier of the Duty regardless of their capacity, barring a small cohort across all faiths that charge tourists for entry and/or hire out the site for large commercial events.”

In answer to a Written Question in the Lords from Lord Pickles as to why the Government has committed to legislating for outdoor religious marriages outside of wholesale reform of marriage law [HL4172], Lord Bellamy, Parliamentary Under-Secretary of State at MoJ, replied as follows:

“As part of the response to the Covid-19 pandemic, in which the circumstances were exceptional, the Government accelerated legislation to allow outdoor civil weddings and civil partnership registrations to take place within the grounds of existing approved premises. Following a recent consultation on these measures, the provisions were made permanent. In addition, respondents were overwhelmingly in favour of the proposal to permit outdoor religious ceremonies in the grounds of places of worship, as long as this is permitted by the respective religious bodies. The Government will therefore take these proposals forward in due course.

The Law Commission’s report on weddings law was published in July and the Government is currently considering its recommendations. As has been set out in Parliament, marriage will always be one of our most important institutions and we must ensure that before publishing a response, we have considered the implications of any changes to the law very carefully.”

Religion and COVID-19 in British Columbia

In Beaudoin v British Columbia (Attorney General) 2022 BCCA 427, the Court of Appeal unanimously upheld orders of British Columbia’s Provincial Health Officer [PHO] in 2020 and 2021 prohibiting in-person worship services. The court concluded that the Gathering and Events Order had not violated s.15 of the Charter of Rights and Freedoms, saying at [243]:

“[T]he G&E orders did not create any distinction based on the religious or non-religious nature of the setting in question. Any distinction between settings permitted to remain open and those required to close was based on epidemiological data and the PHO’s assessment—supported by provincial, national and international data and experience—that the level of risk of viral transmission was unacceptably high in certain types of settings or gatherings involving certain types of activities. The risks associated with retail and other permitted activities—typically involving more transient contact between individuals of a transactional nature—were determined to be different than the risks associated with the activities that form an essential component of in-person religious worship and the celebration of faith.”

The court also held that plaintiffs’ religious freedom rights under s.2 of the Charter had not been infringed, on the grounds that the orders were proportionate to the aim pursued. Fitch J (with whom Butler and Marchand JJ concurred) concluded:

“[307] The COVID-19 pandemic highlighted our interdependence as a community. It forced us to confront the reality that the pursuit of some activities, including the exercise of some constitutionally protected rights, would increase the risk of exponential spread of the disease and the loss of human life. In the exercise of her responsibility to safeguard public health and access to our healthcare system, the PHO made time-limited and setting-specific orders restricting activities she considered to be most likely to foster widespread transmission of the virus. She was uniquely qualified to make these decisions and the exercise of her judgment must be afforded deference.

[308] I acknowledge that the orders imposed significant burdens on many members of our community including, for present purposes, the religious appellants. I do not see how it could have been otherwise. The pressing goals underlying the orders could not be attained without limiting gatherings that posed an unacceptable risk to public health.

[309] In my view, the salutary effects of the PHO’s orders outweighed the harm they caused. They have been shown to be necessary to promote public health, minimally impairing in their effects, and to reflect a proportionate balancing of the competing interests at stake.” [With thanks to Howard Friedman for drawing the case to our attention.] 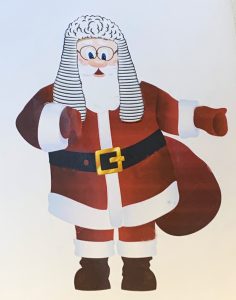 Since Boxing Day is on a Monday, our Annual Quiz will be posted tomorrow, Saturday 24 December, and the answers on Monday 2 January. Other posts scheduled for the first week of 2023 are the ecclesiastical court judgments for December 2022 and the summaries of the cases reviewed throughout 2022. 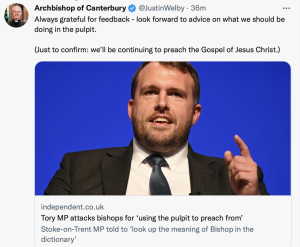