As in previous years, we posted a quiz concerning events in law and religion during the previous 12 months or so, many of which have featured in our posts. The answers and explanations are below:

1. Why in December 2021 was it necessary for Amazon to update its Alexa voice assistant?

Following its advice, a 10-year-old girl who asked for a challenge was told to poke metal into a power outlet, [BBC News].

2. Following changes to social distancing provisions in Wales, it was legal for only 50 fans to attended a Welsh rugby match outside,  but 140 people watched it indoors from the clubhouse on Boxing Day.

True or Bluff? True. But its from the same bungling administration that suggested tenor generated more aerosols than other singer, having picked up this gem from In Quires & Places Where They Meme@QuireMemes which subsequently carried the strap line ” Please do not use our tweets for the basis of government.”

The iPhone torch, which is turned off with the command “nox” (nox noctis 3f, “night”),  preceded by “Hey, Siri”. The more mundane “Torch off” work equally well though!

4. What is the connection between a newspaper column, an Oxfordshire brewery and intelligent design?

“Loose Canon”: This is the name given to “The scriptures of the “Church of the Flying Spaghetti Monster”, De Wilde v The Netherlands [2021] ECHR No 9476/19 at 25; it is also the column in The Guardian written by The Revd Giles Fraser; and is the Loose Cannon Brewery in Abingdon, Oxon.

Canterbury Cathedral, which changed its Twitter name from @no1cathedral to @CburyCathedral.

6. Ceci n’est pas un “Boxing Day Quiz”? On 26 December 2021, we posted our Boxing Day Quiz 2021 followed by the Answers on 1 January 2022. However, since Boxing Day 2022 fell on a Sunday, and the substitute day for the associated Bank Holiday was not until 28 December after Boxing Day, we posted the Quiz on 24 December.

Perhaps we should return to our former heading of End of Year Quiz?

7. What have Samuel Beckett, James Joyce, George B Shaw, and William B Yeats in common?

They are all patrol vessel in the Irish Navy,

It’s St. John the Evangelist Abbeydale, Sheffield which has been transferred at each move: Lichfield is in Canterbury, Southwell in York, Derby in Canterbury and Sheffield in York.

9. What is the correct style for the Bishop of Meath and Kildare?

Uniquely for bishops, Bishop Pat Storey, the Bishop of Meath and Kildare is styled ‘the Most Reverend’.

11. New city status was conferred on eight towns to mark the Platinum Jubilee. Many wrongly assumed that this would result in the creation of additional cathedrals in the four towns currently without one. Which towns already had a cathedral?

Milton Keynes, Dunfermline, Bangor in Northern Ireland, and Wrexham, Colchester and Doncaster, Stanley, in the Falklands.

With regard to Douglas, Isle of Man, Ken Gumbley commented: “Douglas in the Isle of Man does not have, and never has had, a cathedral. ‘Cathedral Isle of Man’ (the Cathedral Church of St German is its proper title) is at Peel, nearly 11 miles away. Nevertheless Douglas is now a city, and Peel is not”.

All have been charged under the Treason Act inter alia, although Jaswat Singh Chail has yet to stand trial. Marcus Sarjaent was sentenced to five years’ imprisonment after pleading guilty to firing blank shots at the Queen in 1981 at the Trooping of the Colour ceremony. The last person to be convicted under the more serious Treason Act 1351 was William Joyce (a.k.a. Lord Haw Haw), who collaborated with Germany during World War II.

According to the House of Lords on Twitter, the answer is 34; the word was supercalifragilisticexpialidocious and was said by Lord McNally in 2011.

15. How long does each  Lords Hansard reporter spend in the chamber before returning to their office to transcribe? 5-10 minutes; 1 hour; or 45 minutes?

The answer is 5-10 minutes. House of Lords on Twitter: comments “5 minutes of parliamentary reporting takes approximately 45 minutes to transcribe”.

The Answer is 4 billion.

17. Reporting what was said in @UKParliament was banned until when? Late 16th century; Mid 15th century; Early 19th century?

The Answer is Early 19th century.

18. Where in UK legislation can one find a definition of the Church of England? 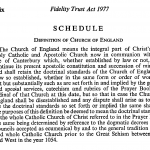 In the Schedule to the Fidelity Trust Act 1977. This, however, is in the context of the private act relating to the administration of the charitable trust. 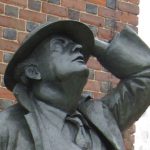 Jennings, but his public sculptures include poets John Betjeman, in St Pancras Station in London, and Philip Larkin in Hull.

20. Attempting to get into the Christmas spirit, the official Royal Mint Twitter account posted a photo of one of its new coins and tweeted: “You’ve heard of elf on the shelf. Now get ready for…”???

21. Who wrote: “An affectionate letter from a bishop must surely be the most disagreeable missive which a parish clergyman can receive. Affection from one man to another is not natural in letters. A bishop never writes affectionately unless he means to reprove severely.”

22. The Dominican Order has long been referred to as “The Hounds of the Lord” – Dominicanus / Domini canes; With which other animal has it also been associated?

Followers of ‘Irish Dominicans‘ on any of their social media will have noticed the new logo of a puffin. In 1760, the French ornithologist, Brisson, gave the puffin the scientific name ‘fratercula arctica’, ‘little arctic friar’, since its plumage reminded him of the black and white garb of Dominican friars!

Traditionally, Dominicans have been referred to as “Hounds of the Lord“. In Latin, Dominicanus, which is similar to domini canis, or “dog/hound of the Lord.”