A week of U-turns, from the Government on COP27 and from within the Church of England on same-sex marriage…

…culminating with today’s announcement from No 10 that “The Prime Minister has decided to proclaim an additional bank holiday to mark the Coronation of His Majesty King Charles III next year”. There was a more nuanced Press Release from Scotland, which stated “The Proclamation of the bank holiday will be delivered to the Privy Council in time for the meeting of Wednesday 9 November”. Perhaps the No 10 Press Office should read s1(3) Banking and Financial Dealings Act 1971?

The Bill of Rights Bill again 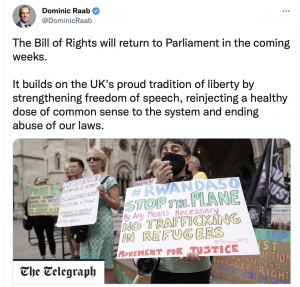 Cohabitation in England and Wales

In its Second Report of Session 2022–23, The rights of cohabiting partners (HC 92), the House of Commons Women and Equalities Committee recommended that the Government “should reform family law to better protect cohabiting couples and their children from financial hardship in the event of separation” and implement the opt-out cohabitation scheme proposed by the Law Commission in its 2007 report on the financial consequences of relationship breakdown and commit to publishing draft legislation for pre-legislative scrutiny in the 2023–24 Session of Parliament (Recommendation 3)

The Government has rejected the proposal, on several grounds: END_OF_DOCUMENT_TOKEN_TO_BE_REPLACED