Same-sex adoption in Northern Ireland, the Lobbying Bill and more on burials (not excluding burials in car-parks) and women in the episcopate

Possibly the major news item of the week was the refusal by the Supreme Court to take an appeal by the Northern Ireland Executive from the NI Court of Appeal in Northern Ireland Human Rights Commission, Re Judicial Review [2013] NICA 37. This was a sorry tale of flagrant disregard by the NI Executive of the House of Lords judgment in P & Ors, Re (Northern Ireland) [2008] UKHL 38 (also cited, confusingly, as Re G) that the blanket ban imposed under the Adoption (Northern Ireland) Order 1987 on all unmarried couples (same-sex, opposite sex or civil partners) adopting as a couple was illegal. The matter was further confused by the Attorney General for Northern Ireland’s intervention at Strasbourg in X & Ors v Austria [2013] ECHR 148 – made without the knowledge or approval of the Law Officers in London.

Before the Court of Appeal Mr Attorney had contended that the effect of the Grand Chamber judgment in X & Ors  was that the earlier House of Lords judgment in Re P/Re G should be narrowly construed on its own facts since, in his view, “The theoretical underpinning of Re P (Re G) must be in some doubt since the decision in X v Austria” (para 24). The Court of Appeal disagreed that there was anything wrong with the previous House of Lords judgment and, clearly, the Supreme Court was equally unpersuaded.

Criticism of Lobbying Bill echoes that of Commons (and many others)

No-one expected the Lords second reading of the Transparency of Lobbying, Non-Party Campaigning and Trade Union Administration Bill to go smoothly for the Government, having been roundly criticised on both the content and its handling of the Bill by: the Commons Political and Constitutional Reform Committee, here; the House of Lords Constitution Committee, here; and the Joint Committee on Human Rights, here. The BBC’s Parliamentary correspondent Mark D’Arcy anticipated the debate as being “the day’s real fun”, but in the event, the six and a half hours of debate did not produce any real fireworks. For that we will probably have to wait for the Committee stage on 5 November.

Women in the C of E episcopate – the saga continues

In advance of the forthcoming meeting of the Church of England General Synod it has been announced that the Church is contemplating a system of arbitration with an independent reviewer to adjudicate disputes in relation to the draft Declaration on women bishops. The draft Declaration at Annex A in the Report from the Steering Committee for the Draft Legislation on Women in the Episcopate GS 1924 includes a statement that

To resolve any subsequent disputes the Steering Committee recommends

“… an Ombudsman-type scheme. This is an approach followed in various parts of the public sector, including Whitehall and the Health Service as well as in higher education where there is an Independent Adjudicator for student complaints against universities” (para 64).

– what Swedes might possibly describe as a kyrkansombudsman. The BBC report quotes William Fittall, Secretary General of Synod, as saying that:

“This is an ombudsman-type process, the real power comes through being able to investigate and publish findings. It is not in itself a disciplinary process. Although the fact that the regulations are made under canon law will mean that if a priest or bishop simply fails to engage with the independent reviewer then that in itself could be a disciplinary offence”.

In our earlier post Richard III reburial: MoJ to challenge decision for judicial review? we noted that the Ministry of Justice had indicated it was seeking to overturn the Protective Costs Order, (PCO) awarded to the Plantagenet Alliance. At the High Court hearing The Plantagenet Alliance Ltd (R o.t.a) v. Secretary of State for Justice and ors on 18 October 2013, Haddon-Cave J ruled:

A detailed analysis has been made by David Hart QC on the UKHR blog, who considers the judgement in the context of the Ministry of Justice consultation paper on further reforms to judicial review.  He concludes:

“The judge ordered [a £70,000 reciprocal cost cap], large by ordinary standards, but as the judge observed ‘this case will be hard-fought, despite entreaties, with no quarter being given on either side’ – a bit like 22 August 1485″.

We expounded at some length on Re St Andrew, Thringstone [2013] Leicester Ch Ct, one of those unfortunate situations in which the wrong person was buried in a previously-reserved grave plot because of an administrative error: a case in which neither family was remotely at fault and, whatever the outcome, one or the other was bound to feel hard done by.

Less dramatically – and in common with Re St. Margaret Horsmonden [2013] Rochester Const Ct reviewed last week – Re St. Mary the Virgin Stansted [2013] Rochester Const Ct, John Gallagher Ch concerned the exhumation of remains that had been buried about 12 years previously – “lengthy but not so lengthy as to be determinative against the Petition”. Both cases were a consequence of third-party action, alleged mistakes by health authorities and a fatal motor vehicle incident for which the driver is serving a custodial sentence. Whilst in the former there were no exceptional circumstances, in Re St. Mary the Virgin Stansted the written evidence of a consultant clinical psychologist attested to the impact on the petitioners of the fatal accident of the their son, its proximity to the churchyard and the necessity to gain access along the road where the driver’s home was located. Following Re Blagdon Cemetery, a faculty for exhumation and re-interment in the churchyard of All Saints, Dulverton was granted, on the ground of exceptional circumstances, i.e. medical reasons.

Although graduates of the University of Wales and of Cardiff University respectively, neither Frank nor David has any grasp of the Welsh language. However, for the benefit of Welsh-speaking internet users, Fr Z has just published Gweddi cyn cysylltu â’r Wê, (A prayer before connecting to the Web). Other language versions are to be found here (including Klingon for Trekkies).

Through a glass, brightly

In Così fan tutte [1] Mozart was one of the earliest to parody the work of Friedrich Anton Mesmer who suggested that a variety of physical and mental ailments could be cured by the application of magnetism. Since then there have many such related claims on the benefits of applied magnetic fields, some of which concern the effects of the physical properties of medieval European stained-glass windows: Australian scientists discovered that these have an air purifying effect as a result of the small particles (nanoparticles) of gold used in the colouring [2]; and in an unrelated study, Danish researchers suggested that this effect might be a means of counteracting the deleterious effects of incense. 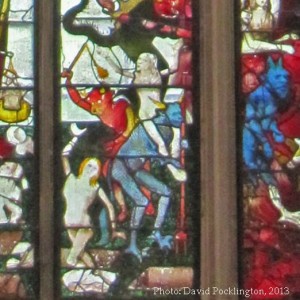 The latest application of this technology is in the 3D panoramic camera that is to be used in the European Space Agency’s 2019 Mars Rover mission. The absence of fading in medieval stained-glass is attributed to the presence of nanoparticles in the glass matrix: gold to produce a red colour and silver for deep yellow colour. This technology will be employed to counteract the high levels of ultra violet light on Mars, due to the absence of ozone in the atmosphere that would otherwise have caused colours to fade. However, the potential advantages of medieval stained glass is only of limited relevance in English parish churches, since as a consequence of the Reformation, there is little now remaining apart from a few examples such as that in St Mary the Virgin, Fairford, Gloucestershire, (detail of west window, above).