Brexit rumbles on, but perhaps the most important event of the week was the outcome of the Northern Ireland Assembly Election – on which we would not presume to comment…

Gina Miller, who mounted the successful challenge in the Supreme Court to the Prime Minister’s proposal to trigger Article 50 TEU by using the Royal Prerogative, has said that she is looking at launching a new challenge if Parliament is not given a vote on the final terms of Brexit. Speaking to Bloomberg, Ms Miller explained:

“If the Government includes the amendment to give Parliament a meaningful vote in 18 months’ time, before handing to the EU Commission, there will be no need for further legal action. But if the Government tries to invoke the Henry VIII powers to prevent full scrutiny, that is another matter. Parliament is the sole, supreme legislative authority to create, repeal or amend our laws.”

She added that she would file any new challenge “reluctantly”, as it would mean that lawmakers were not doing their jobs in holding the Government to account.

On 27 February, the EU Council adopted conclusions on EU priorities at United Nations human rights fora in 2017. The conclusions reaffirm the EU’s strong commitment to the UN human rights system; and the EU will remain actively engaged at the UN Human Rights Council and the Third Committee of the General Assembly to defend and promote the universality, indivisibility, interdependence and interrelatedness of human rights.

These Council conclusions are adopted annually: they set out the main lines of action for the EU at UN human rights fora in the coming months.

The Vancouver Sun reports that the Supreme Court of Canada has agreed to hear two appeals on accreditation of graduates of Trinity Western University’s law school by the Law Societies of British Columbia and Upper Canada. The two societies have refused accreditation because of the provisions in the University’s “community covenant” requiring students to abstain, inter alia, from sexual intimacy “that violates the sacredness of marriage between a man and a woman” – which, they argue, discriminates against LGBTQ people looking to enter the legal profession. In the two cases on appeal, the Court of Appeal for Ontario had upheld the refusal of accreditation by the Law Society of Upper Canada, while the Court of Appeal for British Columbia had ruled in favour the University.

Readers may recall that Pastor James McConnell, of Whitewell Metropolitan Tabernacle in North Belfast, was found not guilty in January 2016 of making “grossly offensive” remarks about Islam by Belfast Magistrates’ Court. The words principally complained of in the charge of which he was acquitted were “Islam is heathen, Islam is satanic, Islam is a doctrine spawned in hell”: see DPP v James McConnell [2016] NIMag 1.

The Belfast Telegraph reports that he is to speak at a conference involving Muslim leaders in Rostrevor on 9 March: it should be an interesting occasion, to put it mildly.

In Bivolaru v Romania [2017] ECHR 207 Gregorian Bivolaru, leader of the “Movement for Spiritual Integration into the Absolute” (MISA) and the “Spiritual Yoga Movement” since 1990, was charged in 2004 with sexual relations with a minor and sexual perversion allegedly committed on MD, who had been a minor at the material time. MISA’s activities had been the subject of special attention from the Romanian Intelligence Service, which put members of MSA under surveillance on suspicion of offences that could endanger national security. In February 2004, an investigation was opened into allegations of propaganda in favour of aÉ totalitarian state and acts of sexual perversion. In 2004, sixteen buildings occupied by members of the MISA, including MD, had been searched. At the end of the criminal proceedings, Mr Bivolaru was sentenced to six years’ imprisonment. In the meantime, however, he had moved to Sweden, where he had been granted political asylum: he was subsequently arrested in Paris and extradited to Romania.

Relying on Article 5 §1 (right to liberty and security) of the Convention, Mr Bivolaru alleged that he had been deprived of his liberty without any plausible reason and detained for 10 hours in a police station despite the judgment of the Bucharest Court of Appeal of 1 April 2004 ordering his release. Relying on Article 6 §2 (presumption of innocence), he complained about the various public statements about him by State representatives. Relying on Article 8 (private and family life), he complained in particular of the alleged disclosure to the media by the authorities of audio-visual material produced during the investigation and the subsequent publicity about his private life.

The Fourth Section ECtHR held that there had been no violation of Article 5 §1 – on the alleged lack of plausible reasons justifying the deprivation of liberty – but that the deprivation of liberty subsequent to the judgment of the Court of Appeal of 1 April 2004 had breached Article 5 §1. There had not been any violation of Article 6 §2 or Article 8.

Which diocesan Chancellor said: “There are no extra ‘Brownie points’ to be gained in this regard by frequency of attendance [at church] or other marks of adherence and loyalty”? does Walsham Willows exist outside the Midsomer Murders series? and which case involved “costs that many, many churches struggling to fund repairs or necessary extensions, [about which, the Chancellor] said at the opening of this hearing, can only read of and weep”?

To find out, read our Ecclesiastical court judgments – February 2017 which was posted a couple of days later than usual on account of the number of cases reviewed. Nevertheless, however, there will be no need to “subscribe to read more” for any of the 18 cases reviewed. Not all of our readers will read the full 497 pages of Chancellor Rodgers’ Re Spitalfields judgment, which is unfortunate, since:

“[9] This case…serves as a really dreadful warning to churches who seek to rely on moneys raised by active groups of ‘Friends’ without giving sufficient thought to how such groups are organised or controlled, and what their legal relationship with the church they wish to help really is. As will be seen in this case, the fundraising charity whose initial aims were to help restore Christ Church grew into a self-perpetuating body whose aims took on a life of their own.”

To those who intend to persevere, there was this encouraging comment from one of our readers who read the whole thing:

“You know when you have some thick holiday novel, and you’re not that taken with some of the characters, and the plot is long and ridiculously complex, and you’re really not sure why you’re still reading it, but something just compels you to keep going so you can find out how it all ends? It was a bit like that.”

Prior to leaving his role of Dean of Jersey, on 27 February, the Very Revd Bob Key told ITV News that separating the Church and State would be “a bad thing” – he was, of course, speaking in the context of the Bailiwick. At the moment, the Dean sits in the States Assembly and can speak during debates but does not have a vote. He suggested that it is beneficial for politicians “to have a professional ethicist”, adding he has been asked for advice on issues including the new equal marriage law.

The Canterbury Diocese is currently seeking a new Dean, whose predecessors included the infamous William Corbet Le Breton, the father of Lillie Langtry, mistress to Edward Prince of Wales. The job description and person specification for the current vacancy do not appear to envisage the appointment of someone with a similar approach to life as Le Breton.

“[50]. …given all that I have rehearsed of the evidence I have no hesitation in concluding that the loss of the permanent fully-pewed state of the nave will be a serious loss to this aspect of the Victorian heritage which forms a part of the architectural and historical heritage of Hull Holy Trinity”.

Nevertheless, in weighing the benefits which the proposals would bring against any loss to the historical and architectural importance of the church, after considering evidence as to the financial viability of the church if the works were not carried out, on balance he determined in favour of the petitioners and granted a faculty.

A similar balancing exercise will be undertaken in relation to Bath Abbey, for which the Victorian Society’s campaign Save Bath Abbey’s exceptional Victorian interior!  notes:

“Bath Abbey is one of the best examples of Victorian church restoration by perhaps the era’s most prominent architect – Sir George Gilbert Scott. There is no doubt that removing these pews would harm this Grade I-listed church’s significance, and there is no need for such drastic changes in a thriving church when other options are available. The last decade or so has seen Victorian church schemes ripped out all over the country and once they’re gone they’re gone for good. We urge the public to speak out against these unnecessary changes.”

In Christian Today, Ruth Gledhill poses the question What Is More Important In Church – Comfy Chairs Or Historic Carved Pews?, observing that the Bath pews might not be quite as grand as Betjeman’s “… high box pews of Georgian days, Which screen us from the public gaze”, adding that it is certainly far from the Abbey’s point of view that “altar, font and arch and pew” should be there for more than just: “So that villagers can say, ‘The Church looks nice’ on Christmas Day.”

Nevertheless, Sir John’s own pew in Wantage, from which he worshipped from 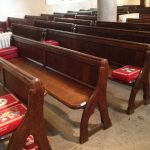 1951 to 1972, was far from grand or upholstered. He describes it, uncritically (but perhaps diplomatically), as “a low bench”, the boxed pews and galleries having been removed by Street in 1857. At this time, the boxed pews were seen as problematic both in terms of the “monopoly on seating” they created, and in their size – the height of 4’ 10” [1.47m] – which was said to “admit of persons indulging in drowsiness and give opportunity for laughing and whispering and other irreverent behaviour”.

The decision in Holy Trinity Hull adds more weight to the argument for the retention of one of the decreasing number of complete Victorian interiors.  We await the considerations with interest.