A week that saw everything from an important ruling on the scope of the Guidance on the Prevent Duty to mistaken identity in a Cardiff pub..

The Prevent Duty, under which “specified authorities” – includiing schools and colleges – must show “due regard to the need to prevent people from being drawn into terrorism”, is somewhat controversial. Supporters insist that it is fundamentally about safeguarding students against all forms of extremism, while critics argue that Prevent predominantly targets – and stigmatises – Muslim communities.

Last week, we noted the decision in Butt v Secretary of State for the Home Department [2017] EWHC 1930 (Admin), in which Ouseley J declared at [98] that the Prevent Guidance “is just that: guidance. It does not direct an outcome, let alone ‘ban’ or ‘direct’ the banning of speakers”. Coincidentally, the LSE Religion and the Public Sphere blog carries a piece by Louis Caresrides, Prevent: Approval amongst teachers and education practitioners differs along ethnic lines, on recent research on the experiences of those in schools and colleges who have had the responsibility of putting the Prevent Duty into practice. The research suggests that the overwhelming majority of respondents had engaged with and accepted the core Government message that Prevent should be understood as part of safeguarding responsibilities in education; however, there was a strong minority concern, particularly among BME respondents, that Prevent was “making it more difficult to foster an environment in which students from different backgrounds get on well with one another”.

The vexed issue of nurses having unwanted conversations with patients about religion has come up again. In Mrs S Kuteh v Dartford and Gravesham NHS Trust (England and Wales: Unfair Dismissal) [2017] UKET 2302764/2016, a nursing sister employed by the Trust who was a “committed Christian” failed in a challenge to her dismissal for inappropriate unwanted discussions with patients about religion and breach of the section in the nursing and midwifery code about not expressing political, religious or moral beliefs in an inappropriate way.

The judgment was handed down on 5 April and we have only just become aware of it: we noted it here.

The Belfast Telegraph reports that a pastor who worked for Swissport as a baggage-handler at Belfast International Airport has lost a claim before the Fair Employment Tribunal. Pastor Colin Houston was dismissed last September following a series of incidents. Before the Tribunal he alleged breach of contract, unfair dismissal and discrimination on grounds of religious belief, political opinion and sexual orientation. His complaints included:

The Tribunal dismissed his claim: having located the ruling, we shall be posting a note on the case.

Restriction on preaching in prison chapel

In Trayhorn v The Secretary of State for Justice (Religion or Belief Discrimination) [2017] UKEAT 0304/16/0108, Mr Trayhorn was a gardener/horticulturalist at HM Prison   Littlehey who was also  an ordained Pentecostal minister. There were complaints about his preaching, he was found not to have the necessary counter-terrorism security clearance required under the Chaplaincy Volunteer Risk Assessment Policy, and he was told not to preach at chapel services in future. He persisted, however, and after further complaints he was sacked. He claimed indirect discrimination before an Employment Tribunal, losing both in the ET and on appeal. Expect a note on the EAT judgment later this week.

Religion News Service reports that the first same-sex marriage in an Anglican church in the UK took place on 1 August at St John’s Episcopal Church in Edinburgh.

In February we reported the Natural England announcement that The Heritage Lottery Fund (HLF) had approved the development stage and initial funding of £3.8M for the 5-year “Bats in Churches” partnership project. The BBC now reports that three churches in Rutland, Norfolk and Lincolnshire will be involved in the pilot scheme, before the project is rolled out. These are: Braunston All Saints, Rutland; Holy Trinity, Tattershall, Lincolnshire; and All Saints Church, Swanton Morley. The project will be rolled out to 20 churches across the UK in March 2018. Ros Kerslake, chief executive of the HLF, said: “We welcome this unprecedented co-operation between church leaders and bat conservationists”. Given the history of the two groups, this seems like involving the Victorian Society in a project on the design of new church seating. On “Building partnerships”, the job description for the Communications Officer (part time) for the project identifies as key capability as the ability to “collaborate, negotiate and influence in a well-informed way to achieve pragmatic outcomes”. Indeed.

Ray Hemingray has identified the five most frequently downloaded judgments from the Ecclesiastical Law Association website. For those who missed them first time around, these are listed below, with the number of downloads in round brackets. However, the reasons for the popularity of some of these does not seem obvious.

(2894) Re St Lawrence Oakley with Wootton St Lawrence [2014] Court of Arches Successful appeal by the Church Buildings Council against the decision of the Consistory Court of the Diocese of Winchester to allow the sale of the Wootton Helmet, a 15th century Flemish Armet then on loan to the Royal Armouries. Appeal allowed. [Link to judgment] See Sale of “Church Treasures”, 21st April 2014.

(1694) Re St George Crowhurst [2014] (Chichester Cons Ct, Mark Hill Ch The Petitioners sought a faculty to authorise the removal of a panel fence erected by neighbours on what was alleged to be churchyard land; to authorise the erection of a post and rail fence within the churchyard boundary; to give a direction as to the ownership of a stone retaining wall on the boundary and as to the responsibility for its maintenance; and to authorise the implementation of recommendations contained in a report from a company of tree consultants concerning trees and shrubs near the boundary. [Link to judgment] See Churchyard boundary dispute: “a most unpleasant case”, 6 September 2014

(1546) Re St Mary the Blessed Virgin Eastry [2012] Canterbury Const Ct, Morag Ellis Com. Gen. After the theft of lead from the roofing, the PCC unlawfully installed Ubiflex, a synthetic coating incurring a cost of £90,000. The Commissary General ruled that this must be replaced after five years. [Link to judgment] Reviewed in our post Church roofs: replacement of lead following theft, 5 November 2014.

(1493) Re St John the Baptist Penshurst [2015] Court of Arches This concerned the appeal by the Victorian Society against the decision in Re St. John the Baptist Penshurst [2014] Rochester Const Ct, Gallagher Ch. to allow the removal from the church of a Victorian eight bay screen by Bodley & Garner and its reinstallation in a church in Leicestershire. Although the appeal was successful, the Arches Court reconsidered the case and approved the original petition. [Link to judgment] [Reviewed here]

(1378) Re St Paul Fazeley [2016] ECC Lic 4 Faculty granted for exhumation of cremated remains of petitioner’s brother’s cremated remains from parents’ grave and re-interment in a nearby new grave, in accordance with father’s wish. Exceptional circumstances: the grave had “become a focus of disquiet and grievance amongst the family members with a real degree of distress to some.” [Link to judgment] [Reviewed here]

On Thursday, we somewhat belatedly posted our round-up  Ecclesiastical court judgments – July, the twelve cases reviewed covering: reordering; exhumation; “church treasures” (the painting Ecco Homo by Murillo); and the reuse of burial space. The latter, considered in Re St Peter Terwick [2017] ECC Chi 2, prompted further thoughts on this topic, which we will be posting next week.

The Charity Commission for England & Wales has advertised for new Chair to succeed William Shawcross. The salary for the half-time post is £62,500 and the appointment is for up to three years. Neither of us will be applying…

The White House has nominated the Governor of Kansas, Sam Brownback, as US Ambassador-at-large for International Religious Freedom. The nomination has met with what only can be described as mixed reviews, as The Economist notes.

For those interested in developments in the Roman Catholic Church, “In ‘onour, er, (H)onour of Yorkshire Day“, Fra’ Eccles has reposted We ‘ad it tough before Vatican II from August 2014, in which he comments on Vatican II in the style of the Four Yorkshiremen sketch – enjoy. [If you’re a Yorkshireman, that is – FC.]

On Monday, we noticed that https://yellowstonesafaritours.com had made a referral to the blog. Eh???

Whilst Frank and David have never been refused entry to a Cardiff pub, seven Roman Catholic priests walked into the City Arms and were asked to leave because staff thought they were on a stag weekend. This was particularly ironic in a pub run by the Brains brewery since one of the priests was the “Reverend James”, the name of Brains’ best-selling beer. However, eventually the manager approached them at the door and reassured them that he did accept that they were who they claimed to be, invited them back and bought them a round of drinks.

The RC Archdiocese of Cardiff commented: 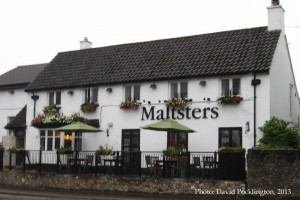 “We’d like to thank the City Arms for being good sports through all of this and their kind gesture to our seminarians – and please note a number of our clergy, including the Archbishop of Cardiff, frequent your bar so don’t turf any more out please!” However, we wonder what would happen if the recently consecrated +June Osborne were to turn up in clerical garb at the Maltsters – the closest Brains pub to the Cathedral – and say she is the Bishop of Llandaff…